Witness a volcanic eruption happening before your eyes on our La Palma & Cumbre Vieja Volcano Day Trip. We'll set off from Tenerife to see the lava flows and smoke plumes produced by this volcanic eruption, which began on 19 September 2021, from a safe distance.

50% of the profits from this activity will be donated to the municipalities most affected by the volcano through the Cabildo de La Palma.

Witness a volcanic eruption happening before your eyes on our La Palma & Cumbre Vieja Volcano Day Trip. We'll set off from Tenerife to see the lava flows and smoke plumes produced by this volcanic eruption, which began on 19 September 2021, from a safe distance.

50% of the profits from this activity will be donated to the municipalities most affected by the volcano through the Cabildo de La Palma. 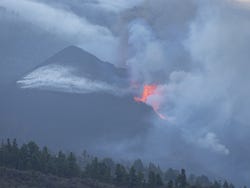 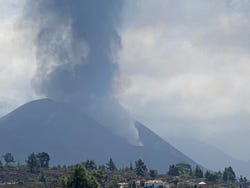 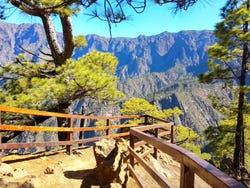 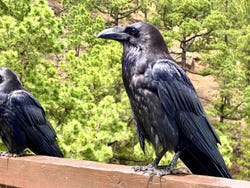 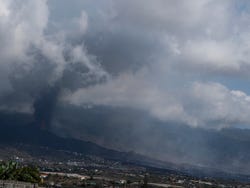 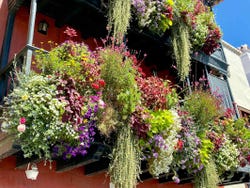 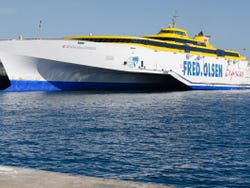 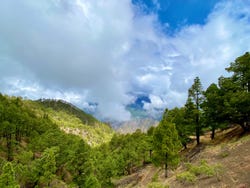 At the scheduled time, we'll see you at the Port of Los Cristianos in South Tenerife. We'll board a ferry and set sail for the island of La Palma to get a close-up view of the most recent volcanic eruption in the Canary Islands.

As we get closer to the Isla Bonita, we'll start to see the clouds of smoke and ash that are still being produced by the Cumbre Vieja volcano.

2 hours and 30 minutes later, we'll arrive in Santa Cruz de La Palma. From there, we'll hop on a bus that'll take us to the municipality of El Paso, where we'll have a delicious lunch.

After eating lunch, we'll head to the village of Tajuya, located in the foothills of the Cumbre Vieja Natural Park. Once we've arrived, we'll make our way to the Parish Church of the Sagrada Familia, where there's a square from which we'll be able to observe the eruption safely.

We'll spend an hour discussing volcanology and explaining how the Canary Islands were formed while we watch the lava flows pouring out of the Cumbre Vieja volcano. In addition, we'll cast our minds back to 1971 when the Teneguía vent of Cumbre Vieja also erupted.

Our next stop will be the Caldera de Taburiente National Park where we'll visit the Cumbrecita Viewpoint. From this spot, we'll look out at incredible views of the island's deep volcanic caldera. As we admire this unique landscape, we'll learn more about the eruptive processes that La Palma has undergone throughout its history.

We'll then return to Santa Cruz de La Palma, where we'll take a short sightseeing tour of its seafront promenade so you can see the island's colourful houses and distinctive wooden balconies.

At 5 pm, we'll board the ferry again and return to Tenerife. Our day trip will finish at around 7:30 pm as we arrive back at the Port of Los Cristianos.

The activity takes place with a guide that speaks in English, Spanish and Italian.

US$ 123.10
Free cancellation up to 24 hours before the service starts
Book

Guid is very competent and sincere!!

Well organised, good food. Only downside was that the volcano was not doing much this day. Also for solo travellers there is not a good moment to find another solo traveler to talk to, be aware as solo traveller to bring enough with you to read!

Great to see the active volcano

8.30 / 10 69 reviews
Travel through volcanic landscapes from the heights with this Teide Observatory Day Trip + Transfer from South. You'll admire the best views from the cable car!
US$ 71.10
Book
like

8.10 / 10 179 reviews
Immerse yourself in Tenerife's nature: enjoy a whale and dolphin watching boat trip, marvel at the dramatic cliffs of Los Gigantes and admire the beautiful rocky beaches of Masca.
US$ 50.80
Book
like

10 / 10 1 review
Indulge in the rich culinary culture of the Canary Islands on this irresistible food and wine tasting tour of Tenerife's guachinches, traditional local taverns.
US$ 129.80
Book