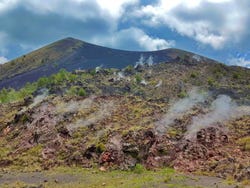 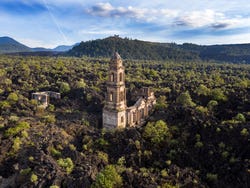 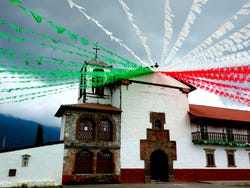 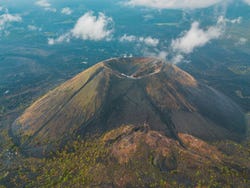 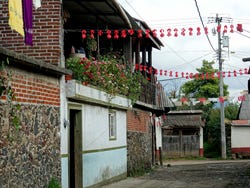 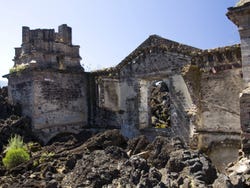 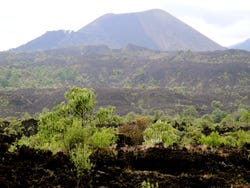 After picking you up at 8 am from your hotel in Morelia, we'll head towards the Paricutín Volcano. Upon arrival at the base of the mountain, we'll set out on a 2 km hiking route.

During the hike up the volcano, we'll get to see the hawthorn, prickly pear and oak trees scattered on its slopes. You'll notice that much of the terrain is arid due to its volcanic activity. Did you know that it holds the title of the youngest volcano on earth? It emerged suddenly from a farmer's field in the middle of the 20th century, on 20 February 1943.

After our hike, we'll take the minibus to see the lava-covered ruins of the Church of San Juan Parangaricutiro, the only remains of a village that was destroyed by Paricutín's eruption. We'll go inside the church, whose façade and bell tower remain incredibly well preserved after surviving nine years of volcanic activity.

Next, we'll go to the village of Angahuan, where we'll get to experience the local indigenous Purhepecha culture and language. We'll have the opportunity to see some of its most important monuments, including the mural depicting the Legend of Paricutín, the Franciscan Chapel of Huatápera and the Moorish-style Church of Santiago Apóstol. After the tour of Angahuan, you'll have an hour of free time to get some food and try typical delicacies.

At the end of the tour, we'll make our way back to your hotel in Morelia, where we will arrive at 8 pm.

US$ 37.60
Free cancellation up to 48 hours before the service starts
Book

Visit the Sierra Chincua Monarch Butterfly Sanctuary on this tour from Morelia and learn all there is to know about the delicate insect's migration patterns.

Explore one of the most fascinating attractions in the state of Michoacán on this private tour to Janitzio Island and enjoy a tranquil boat cruise on Lake Patzcuaro.

Explore a Purépecha archaeological site and two islands nestled in the middle of a lake with this tour to Yunuén, Pacanda and Ihuatzio from Morelia.