Known as "the palace of the people", the Moscow metro stations are a veritable museum. Get to know all about them with this guided tour of the Moscow underground. 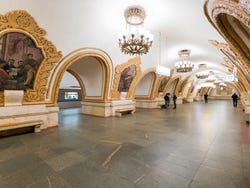 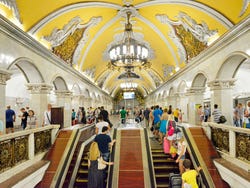 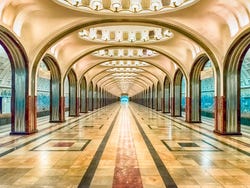 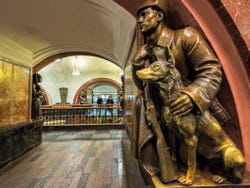 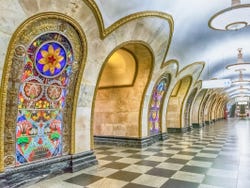 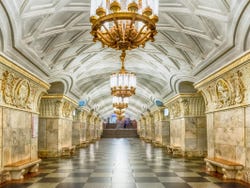 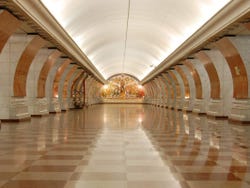 Guided Tour of the Moscow Metro

At 11 am we'll meet in front of the legendary Bolshoi Theatre. Three minutes walk away we'll find the Teatralnaya station. Here we'll start our guided tour of the Moscow Metro.

Since its inauguration in 1935, the Moscow metro has been one of the most important in the world. Its stations are real palaces, built mainly in Soviet times for the use and enjoyment of the proletariat. We'll start by taking the green line, line 2, from Teatralnaya to Mayakovskaya station. Here we'll see its mosaics dedicated to aviation and its futuristic decoration.

Our next stop is the Belorusskaya station. Its impressive white coffered ceiling with borders will surprise us as we walk along the corridors. From here we'll take the brown circular line (line 5) to Novoslobodskaya station. As you stroll along, you'll think you're in a sacred place, as it is decorated with numerous stained-glass windows. Continuing along the circular route, we'll arrive at Komsomolskaya, one of the most beautiful stations on the Moscow metro. Its yellow-painted baroque ceilings will transport you to a palatial atmosphere.

Our last stop on the circular line will be the Kiyevskaya mosaics. At this station, we'll take the dark blue line 3 to the bronze sculptures at Ploshchad Revolyutsii. One of them, a hunter's dog, has a muzzle worn down by students. The cause? It's believed that if you put your hand over you'll have luck for your exams.

At Ploshchad Revolyutsii we leave the metro and return to the Theatre Square.

Following this link you can download a colour map of the Moscow metro, with the names of the stations both in Russian Cyrillic and in English.

If you would prefer to take this tour in private, you can reserve our private tour of Moscow, and inform the guide of your preferences. Private tours can be taken at any time and on any day of the week.

Tickets for the Moscow metro.

Theatre Square, in front of the façade of the Bolshoi Theatre.

No rating yet
Is there any better place to taste vodka than in Moscow? On this tour, you will become an expert on this quintessential Russian drink and try local snacks too.
US$ 59.30
Book
like

10 / 10 1 review
See the Russian capital's most important sights on board its most emblematic vehicle on this guided tour of Moscow in a Soviet van!
US$ 83
Book
like Free

8.40 / 10 17 reviews
Embark on a 2.5-hour free walking tour of the capital of Russia and discover its top sights including, the Red Square, St Basil’s Cathedral, the impregnable Kremlin, among others
Free!
Book