Discover the secrets of the iconic Brooklyn Bridge by night and explore the hip New York neighbourhood of Dumbo on this guided walking tour. 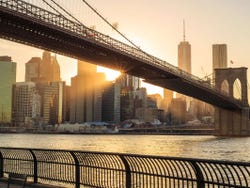 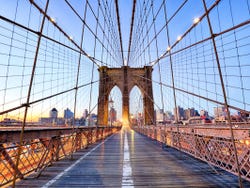 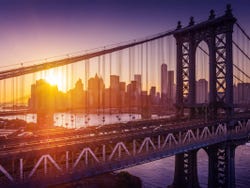 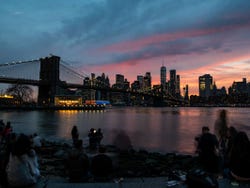 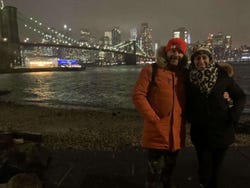 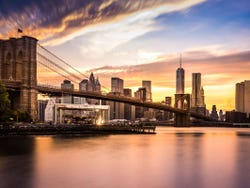 We'll meet at the World Trade Center at the appointed time to begin this tour of the Brooklyn Bridge and Dumbo.

The tour will start by walking across the iconic Brooklyn Bridge, one of New York's most famous icons. Do you know how long it took to build the footbridge? Is it true that many people committed suicide from its arches in the past? Where is its mysterious secret door? All these curiosities and many more anecdotes will be revealed to you as we walk along its famous footpath.

During this walk, we'll have the opportunity to get some of the most famous and spectacular views of the New York skyline and harbour - you won't be able to stop taking pictures!

On the other side of the waterfront awaits the Brooklyn borough, one of the five boroughs that make up New York City. One of Brooklyn's most famous areas is the neighbourhood of Dumbo. The acronym stands for Down Under the Manhattan Bridge Overpass.

Once there, we'll take a guided tour of this popular neighbourhood to get a closer look at the reasons for its rise. You'll be able to appreciate how the trendy shops and locals intermingle with the more traditional ones, creating an interesting and enriching fusion.

The tour will end at a very special viewpoint in Brooklyn, to admire an unforgettable sunset.

Sandra was really kind and she accepted to made the tour in Spanish for us but I was expecting to recibe more information and more importante facts during the tour, I actually feel that it was like a walk around the neighborhood and not a tour,

Really nice and unforgivable tour ! You must do this !

The tour was informative and fun. It covered a lot of precious places, nice views, had opportunities for pretty pictures. The guide was very friendly, funny, patient and very easy to understand (important for us as foreigners). The whole tour was a gem. Thank you very much!

Cristina our guide took great pains on the tour and it was very complete and fun ... Opinion translated. Show original.

8.90 / 10 72 reviews
Delve into New York’s most diverse neighbourhoods during this New York Contrasts Tour. Discover the city’s unexplored boroughs including Harlem and The Bronx.
US$ 60
Book
like

8.50 / 10 252 reviews
The New York Pass includes free access to over 80 of the city’s attractions, like the Empire State Building, Statue of Liberty ferry, 9/11 Memorial & Museum, among others
US$ 129
Book
like Skip the line

9.80 / 10 11 reviews
Visit the Hudson Yards neighbourhood to discover the must-see building on Manhattan's west side with this The Vessel Ticket. You'll enjoy the incredible views.
US$ 10
Book