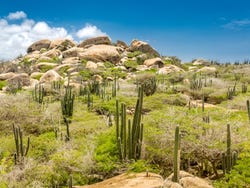 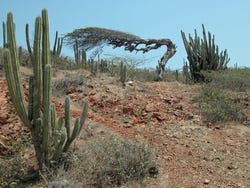 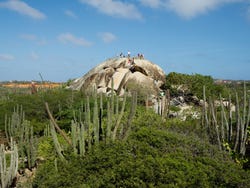 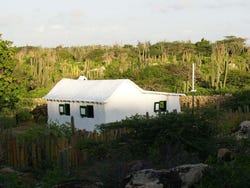 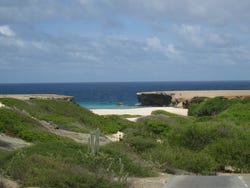 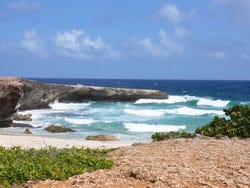 We'll pick you up from your hotel in Oranjestad at 9 am and board a minibus to go to the Aruba Arikok National Park, a natural jewel of this Caribbean island. Are you ready to discover all its secrets with a hiking route?

Accompanied by an expert guide in the local flora and fauna, we'll explore this protected area which is home to limestone rocks, volcanic formations and mountains that run into the sea - you'll love it!

As we walk through Arikok, we'll talk about the famous Ayo rocks, sacred to the island's indigenous people. These are giant rock formations that dot Arikok's park and contrast with the flat landscape of the island. How did they appear? Were they carved by humans? We'll unveil these and other mysteries during the hiking route.

We'll also have the opportunity to visit the Arikok Visitor Centre, which exhibits the main species of animals and plants endemic to the park. The whip lizard, the cat's eye snake and the endangered rattlesnake are some of the animals shown in the centre.

After three and a half hours hiking through the Arikok National Park, we'll end the route and take you back to the hotel in Oranjestad.

Free! Free cancellation up to 24 hours before the activity starts. If you cancel under this time or do not show up, you will not be refunded.
like -26%

No rating yet
Discover beautiful beaches, hidden treasures and an incredible sea bed with this South Aruba Guided Tour. You'll get the chance to snorkel in paradise.
US$ 37 US$ 27.50
Book
like

No rating yet
Climb onto a horse and enjoy the northern Arubian landscape. You'll ride past the impressive rugged desert full of cacti, cliffs and divi-divi trees.
US$ 95
Book
like New

New
Want to experience Aruba in the most fun and unique way? Then hop on this party bus and explore North Aruba to the tunes of the best Caribbean music.
US$ 40
Book