There is no better way to begin your trip to Prague than with a tour through the historic centre with an English speaking guide: over 2.5 hours, this walking tour will teach you about the history of the old town and the old Jewish ghetto.

There is no better way to begin your trip to Prague than with a tour through the historic centre with an English speaking guide: over 2.5 hours, this walking tour will teach you about the history of the old town and the old Jewish ghetto. 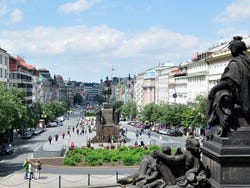 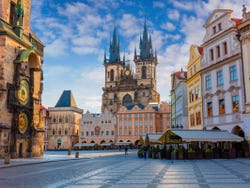 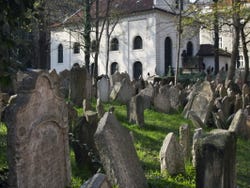 Beginning in Prague's main square, Wenceslas Square, which houses the imposing National Museum, over the course of 2.5 hours the tour will dive into the Old Town, its winding streets filled with small shops selling Prague's most typical wares: porcelain, glassware, marionettes or absinthe.

The tour then passes through the old Jewish Ghetto, a walled-off and poverty-stricken section of town where for some 700 years the discriminated-against Prague Jewish community lived. Here you can see the cemetery dating back to the 15th century and 16th-century synagogues.

Next the tour passes through Ungelt, founded in the 12th century as a place where foreign merchants paid customs on the goods they brought into Prague. Then nearby the tour makes a stop before one of the most impressive sights in the Old Town, Týn Church, which dominates the landscape with two gothic towers each 80m tall.

After a walk down Celetna Street the tour ends in front of the "Powder Tower", one of the symbols of Prague and one of the 13 original city gates which today separates the old town from the new.

Entry to monuments and attractions

9.40 / 10 842 reviews
Your first time in Prague? Get to know the principal sights of "the city of a hundred spires" with this free walking tour of the Czech capital.
Free!
Book
like

9 / 10 537 reviews
Experience this surreal show with the Anthology: The Best of Black Light Theatre in the Srnec, the first black light theatre in the world.
US$ 28.10
Book
like

8.40 / 10 219 reviews
Fall in love with Prague's ancient streets and monuments on this evening tour of the Czech capital illuminated by ornate street lamps and the light of the moon.
US$ 17.60
Book