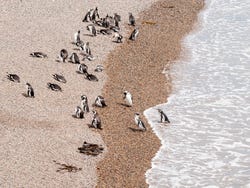 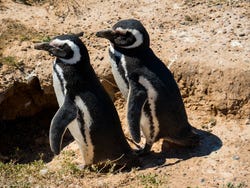 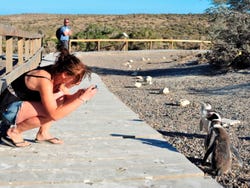 Having picked you up from your hotel in Puerto Madryn we'll make our way directly to Punta Tombo, the best place to see penguins in all South America, even being able to wander among them! In the visitor centre, you'll be taught interesting facts about the Patagonian Penguins and the ecosystem that they come back to year after year to reproduce.

As well as the penguins, in this part of Argentina you can see a wealth of exotic local wildlife, including guancanos (similar to a llama) Patagonian mara, rheas and foxes, learning to distinguish them from one another. Then, after some free time to eat lunch, we'll head northwards to the coast of the Isla Escondida: a coastal area famous for its population of elephant seals: the largest seal in the world with an adult measuring up to 5 metres and weighing 4 tonnes.

Then, after a day appreciating the spectacular biodiversity of the area, we'll head back to your hotel in Puerto Madryn.

Penguins migrate to Punta Tombo to mate and lay their eggs between September and February. However, animals are unpredictable, and it is not guaranteed that you'll see the species at all times throughout the season.

If you'd like to see more of Argentina's incredible wildlife, why not go on a whale watching tour in Valdes Peninsula, one of the areas with the highest concentrations of marine life in the Southern Hemisphere.

A minimum of 2 people is required to book the activity.

No rating yet
Elephant seals, sea lions and penguins... Meet the incredible wildlife native to the Valdes Peninsula, a unique nature reserve near Puerto Madryn.
US$ 80.30
Book
like

No rating yet
Located in the middle of Golfo Nuevo, the Punta Loma Reserve is home to a major colony of sea lions which you can see on this fantastic tour.
US$ 33.40
Book
like

10 / 10 1 review
Encounter fascinating Patagonian dolphins, and lovely penguins and other birds native to the Punta Tombo Nature Reserve, when you take our amazing trip.
US$ 142.60
Book