Explore Nevsky Prospekt, St Petersburg’s main artery, on a 3-hour guided walking tour and learn about the numerous events that took place on this boulevard while you admire its landmarks. 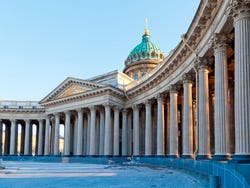 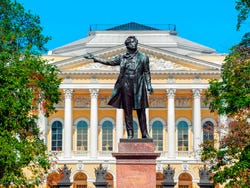 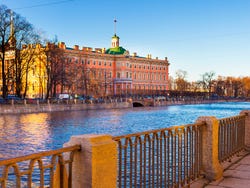 Begin your walking tour at 10am in front of Kazan Cathedral, one of the main monuments on the legendary Nevsky Prospekt.

Accompanied by your professional English-speaking guide, marvel at the temple’s impressive golden dome and its impressive colonnade, which was closed after the Russian Revolution. Next, head to Arts Square, listed a UNESCO World Heritage site, and is one of the most picturesque parts of the city.

In the center of the square stands a monument dedicated to Alexander Pushkin, the famous Russian poet. The square is flanked by some of the most important cultural buildings, like the Russian Museum and the Saint Petersburg Philharmonic Orchestra. Some of the most prestigious musicians in the world play at this music hall. Your guide will also point out the Mikhailovsky Theatre, one of the oldest opera and ballet houses in the country, with an incredible repertoire, famous around the world.

Next, you’ll head to St. Michael’s Castle, also known as the city’s Main Engineering School, which is surrounded by the Moyka and Fontaka Rivers. The royal palace was commissioned by Emperor Paul I, who scared of being assassinated, built it in the intersection of two rivers as it very hard to get to. Nevertheless, the Emperor was killed in his bedroom a few days after moving into the palace. The building was abandoned by his family after his death and was transformed into the Main Engineering School.

After marveling at this majestic palace, your guide will lead you its gardens. Then, you will head to the Church of the Savior on Blood, built on the banks of Griboyedov Canal. Your tour will come to an end at in front of the church at 1pm.

If there are still places available, you can book until the previous day (local time in St Petersburg).

US$ 16.20
No hidden fees or surcharges
Free cancellation up to 3 days before
Book

Free! Free cancellation up to 3 days before the day of the activity. If you cancel under this time or do not show up, you will not be refunded.
When the minimum number of participants (4) is not reached, we will contact you to offer you other alternatives.

No rating yet
Ever wondered what it would be like to shoot a Kalashnikov AK-47? Pull the trigger on a unique adrenaline-filled experience at a St Petersburg shooting range!
US$ 140.40 per group
Book
like

9.70 / 10 45 reviews
It's the deepest metro network in the world and it's beautifully decorated... what else will you discover on this guided tour of the St Petersburg metro?
US$ 16.20
Book