Taranto is one of the largest cities in Puglia and boasts a great historical and cultural heritage. Come discover it on this private tour with an exclusive guide just for you and your group!

Taranto is one of the largest cities in Puglia and boasts a great historical and cultural heritage. Come discover it on this private tour with an exclusive guide just for you and your group! 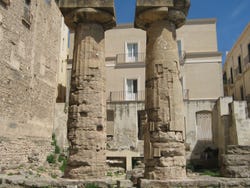 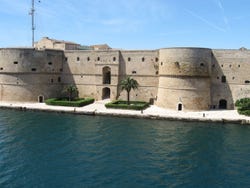 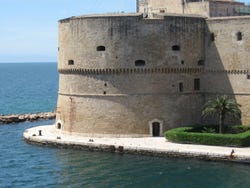 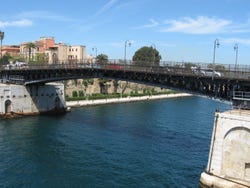 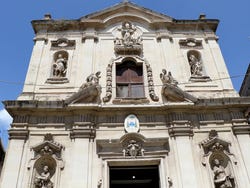 At the selected time, your guide will be waiting for you in Piazza Castello, where most of the main monuments of Taranto are located. Due to its particular location, Taranto is nicknamed the City of Two Seas, straddling the Mar Piccolo and Mar Grande. Ready to learn about the history of this ancient Greek colony founded by the Spartans?

We'll start our tour by admiring the Doric columns of the Temple of Poseidon. Dating back to the 6th century BC, it's considered the oldest temple in Magna Graecia! Leaping forward in time, we'll then move to the Byzantine era, visiting the Castello Aragonese, also called Castel Sant'Angelo, a solid quadrangular fortress that currently houses the Navy.

Near this bulwark, we'll cross the famous swing bridge of Taranto, considered an emblem of the city, which connects the island of Borgo Antico with the peninsula of Borgo Nuovo. This work of civil engineering, inaugurated in 1887, overlooks the navigable canal that connects the Mar Grande and Mar Piccolo.

Next, we'll head to the Cathedral of San Cataldo, built in the second half of the 10th century by the Byzantines. You'll observe its Baroque façade, the result of changes made in 1700, before entering the temple and admiring the precious mosaic floor and the Chapel of San Cataldo.

After two hours spent discovering the monumental heritage of the city, the private tour of Taranto will conclude.

Per group from
US$ 212.70
Free cancellation up to 0 days before
Book