Ancient civilisations, spectacular natural landscapes and enchanting colonial cities: discover the magic of Mexico on this unforgettable six-day tour of Chiapas and Yucatan. 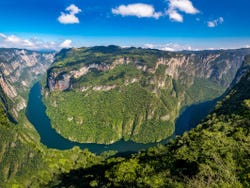 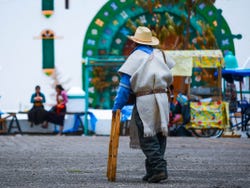 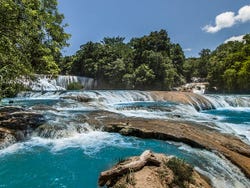 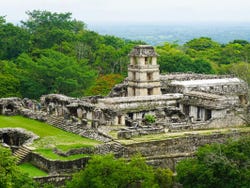 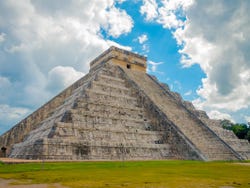 On your arrival at Tuxtla Gutierrez Airport, we'll pick you up and head straight to the Sumidero Canyon, delving into Mexico's impressive natural beauty. We'll enjoy a two hour boat cruise through this spectacular gorge, admiring the sheer cliff faces and lush rainforest either side of the Grijalva River and watching out for the incredible wildlife that inhabits the ravine. Keep your eyes peeled for crocodiles, monkeys and birds! After the boat tour, we'll make our way to the hotel in San Cristobal de las Casas, where we'll spend the night.

After breakfast, we'll head to the indigenous villages of San Juan Chamula and Zinacantan. Almost entirely inhabited by Tzotzil Maya people, these towns offer a unique look into the culture and traditions of this ancient civilisation. As well as taking in the bright colours and vibrant atmosphere in the streets, we'll visit the famous whitewashed Church of San Juan Chamula, where Catholic and local religious beliefs come together in a fascinating place of worship.

In Zincantan, we'll be welcomed into a family cooperative, where we'll get to witness the pre-Columbian waist weaving technique while enjoying a popular local drink. We'll also get to taste a handmade tortilla, before we return to San Cristobal de las Casas for a sightseeing tour of the picturesque colonial town's most important places of interest. You'll then have the rest of the day free in San Cristobal.

Leaving San Cristobal behind, we'll set off to the northeast. Having enjoyed a box breakfast on board the bus, we'll arrive at the beautiful waterfalls in Chiapas fully energised. You'll be enchanted by the mesmerising beauty of the falls, and you'll even get to enjoy a refreshing dip in the sparkling blue water of their natural pools. After making the most of the waterfalls, we'll continue on our journey to Palenque, where we'll spend the night.

After a hearty breakfast at the hotel, we'll make our way to some of the most important Mayan ruins in Mexico. The Palenque archaeological site is home to spectacular Mayan architecture and sculpture, as we'll discover on our guided tour of the ancient city. We'll see the impressive Temple of the Inscriptions, the Palace, the Temple of the Count and the Temple the Cross, which make up just a small percentage of the historic metropolis.

Next, we'll continue to Campeche for a guided tour of the coastal city's quaint historic centre. You'll then get to further explore on foot, admiring the colonial architecture of its houses, churches and old city wall up close.

On the fifth day of our tour, we'll have breakfast at the hotel before visiting the archaeological site of Uxmal, a UNESCO World Heritage Site nestled in the lush Mexican jungle that proved to be the ancient city's downfall. Marvel at the towering Pyramid of the Magician, the Governor's Palace and the Great Pyramid as you discover how they've been excavated from the rainforest.

After exploring Uxmal, we'll head to Merida, a charming whitewashed colonial city where we'll tour emblematic landmarks like the Government Palace, City Hall, the Cathedral and the Casa de Montejo, before relaxing ready for our final day.

Having had our last breakfast at the hotel, we'll leave Merida behind in the direction of one of the New Seven Wonders of the World: Chichen Itza. Learn all about the Maya civilisation as you explore this legendary ancient city and admire its incredible structures, impressive both for their sheer size and for the intricate detail of their architecture. We'll see the Great Ball Court, one of thirteen in the city where the Mesoamerican ball game was played; the Skull Platform where human sacrifice victims were impaled, and the Sacred Cenote, a natural sinkhole used in ancient Maya rituals.

We'll enjoy a delicious lunch together on the last day of our adventure, before heading to Cancun or Riviera Maya to drop you off at your selected hotel or the airport after six unforgettable days exploring Mexico.

What does the tour include?

Our Chiapas and Yucatan 6 Day Tour Package includes five nights' accommodation with five breakfasts (1 box breakfast) and one lunch, transfers to and from Tuxtla Gutiérrez Airport and transport around the country. An English-speaking guide throughout the tour and all entrance fees to monuments described in the itinerary are included.

You'll need flights arriving in Tuxtla Gutiérrez​ before 1 pm on the day you've booked to start your tour and departing from Cancun after 6:30 pm on the last day of the tour (unless you're staying in Cancun or Riviera Maya, in which case you'll be dropped off at the hotel you've booked).

This six-day tour package includes five nights' accommodation in the following hotels. Prices are based on two people sharing a double room:

Please note that the order of the itinerary of this six-day tour package is subject to variation due to the closure of monuments on certain days.

The minimum age to take part in this activity is 10 years old.

* The price increases on the 12 December

All entrance fees to monuments and activities described in itinerary.

You can book up to 30 days before (Tuxtla Gutiérrez local time) if there are still places available.

US$ 1,311.67
No hidden fees or surcharges
Free cancellation up to 30 days before
Book

10 / 10 1 review
Discover the natural beauty of Mexico on this tour from Tuxtla Gutiérrez: cruise through the incredible Sumidero Canyon and end in San Cristóbal de Casas.
US$ 61
Book
like

No rating yet
Discover the traditions, cultures and religions of Mexico's indigenous communities on this tour of San Juan Chamula and San Lorenzo Zinacantán.
US$ 55
Book