The Medieval capital of Nepal, Bhaktapur has preserved its ancient splendour. Discover why this magnificent historic city is a World Heritage Site on this guided excursion from Kathmandu.

The Medieval capital of Nepal, Bhaktapur has preserved its ancient splendour. Discover why this magnificent historic city is a World Heritage Site on this guided excursion from Kathmandu. 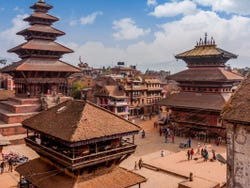 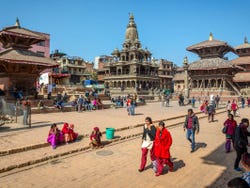 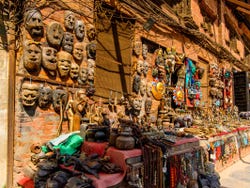 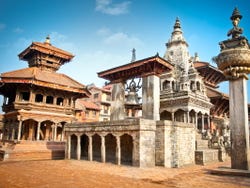 After being picked up from your hotel in Kathmandu, you'll head to the east of the capital. After a little less than an hour, you'll reach the historic city of Bhaktapur, whose name means "Place of Devotees". You'll soon see why as you take in the sight of its enchanting ancient temples.

Begin your guided tour of Bhaktapur exploring the city centre. As you stroll around the centuries-old streets, admire the traditional architecture typical of this region. The style of the buildings provides a contrast to the rest of Nepal, due to Bhaktapur's isolated location at the eastern end of the Kathmandu Valley.

You'll discover the city's most iconic monuments and landmarks, marvelling at the incredible history of Durbar Square, the royal palace of the former Bhaktapur Kingdom. Any number of exquisitely carved Hindu temples are found here, their dedications to different deities being demonstrated in their architecture. In their midst, the 15th century Palace of 55 Windows stands out as a magnificent example of Nepali art.

Having admired Lu Dhowka, the intricate golden gates that lead to the palace, you'll continue your tour of Bhaktapur, making your way to Nyatapola Temple, a five-storey pagoda dating back to the early 1700s, and the Dattatreya Temple.

As you wander past these incredible ancient buildings which have earned the city its UNESCO World Heritage Site status, you'll also see the shops and stalls where locals sell their traditional handicrafts, giving you further insight into the culture and history of Bhaktapur. At the end of your tour, you'll return to Kathmandu where you'll be dropped back off at your hotel.

The phenomenal Biki guide. The place is a lot like Patan ..... if you do both tours it could be a bit of a repeat. Opinion translated. Show original.

No rating yet
Experience one of the most incredible sights in Nepal: watching the sunrise over Nagarkot, with the Himalayas in the background.
US$ 154 per group
Book
like

10 / 10 2 reviews
Enjoy the unique experience of seeing the highest mountains in the world from a bird's eye view on this scenic flight over Mount Everest and the Himalayas.
US$ 199
Book
like

No rating yet
Enjoy unforgettable views of the world's tallest mountain on this 5-day Everest trek. You'll be mesmerised by the spectacular Himalayan surroundings!
US$ 799
Book