The beautiful temples of Kathmandu Valley are one of the Nepalese capital's main attractions. Discover their secrets on this tour, visiting Durbar Square, Pashupatinath and Swyambhunath.

The beautiful temples of Kathmandu Valley are one of the Nepalese capital's main attractions. Discover their secrets on this tour, visiting Durbar Square, Pashupatinath and Swyambhunath. 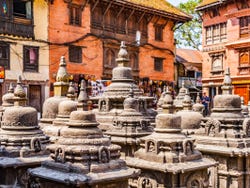 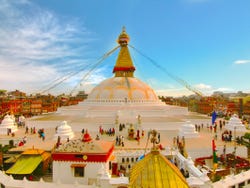 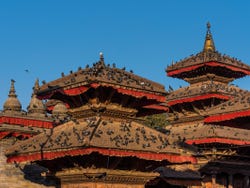 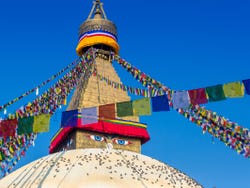 On the day of your tour, you'll be picked up from your hotel at 9 am, ready to begin exploring the temples of Kathmandu Valley with your expert English-speaking guide.

The first stop along your route will be in the Nepalese capital's Durbar Square, "durbar" meaning royal palace. This historic square is located in front of the old royal palace of the former Newar Kingdom of Kathmandu, and is a designated UNESCO World Heritage Site. Still considered the heart of the old town, the palaces, temples and courtyards that remain are a magnificent reminder of Nepal's architectural heritage.

Continuing on your tour by bus, you'll be taken to the Pashupatinath temple, in the east of Kathmandu Valley. After a journey of around 20 minutes, you'll reach the enormous Hindu complex on the banks of the sacred River Bagmati. Dating back to the 5th century and dedicated to the deity Shiva, Pashupatinath is made up of over 500 temples, monuments and ashrams built in the pagoda style. The gold roof of the main sanctuary will leave you in awe!

Next, you'll head to the Buddhist stupa of Boudhanath, one of the largest of its kind in the world. Considered by many to be the most spiritual place in Kathandu, it has been a place of prayer for many centuries.

The final stop on your guided tour of the valley's temples will be at Swayambhunath, a stupa that is also known as the Monkey Temple... see if you can guess why! As well as its majestic architecture and the vibrantly colourful prayer flags surrounding it, the most striking part of this incredible monument are the paintings of the Buddha's eyes and eyebrows that look down in all directions upon those who visit. The structure has become one of Kathmandu's most iconic landmarks.

At the end of your tour, you'll be dropped back off at your hotel at 5 pm.

Good places and it is recommended to visit them The regular guide does not guard us much but well, it lasts less time than what they are selling, I would have wanted to spend more time in some of the places visited Opinion translated. Show original.

5.70 / 10 6 reviews
Experience one of the most incredible sights in Nepal: watching the sunrise over Nagarkot, with the Himalayas in the background.
US$ 154 per group
Book
like

8 / 10 2 reviews
Enjoy the unique experience of seeing the highest mountains in the world from a bird's eye view on this scenic flight over Mount Everest and the Himalayas.
US$ 199
Book
like

8.70 / 10 12 reviews
The Medieval capital of Nepal, Bhaktapur has preserved its ancient splendour. Discover why this magnificent historic city is a World Heritage Site.
US$ 60 per group
Book