Amman, Petra, Wadi Rum and the Dead Sea are the jewels in Jordan's crown: discover the best of the beautiful historic country with this eight-day tour package! 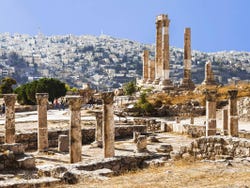 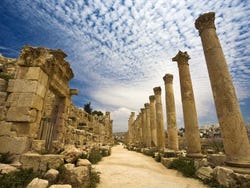 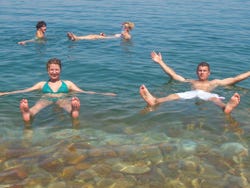 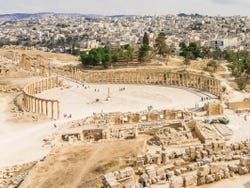 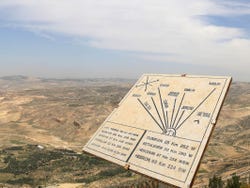 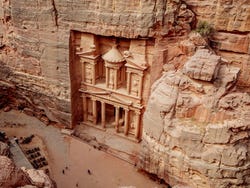 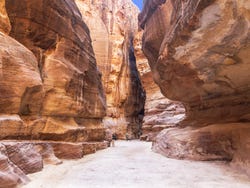 On arrival at Queen Alia Airport in Amman, we'll pick you up and take you to your hotel for the night, to eat dinner and relax ready for the adventure of the week ahead.

After breakfast at your hotel in Amman, we'll set off to the first stop on our tour of Jordan and one of the most incredible natural spaces in the Middle East: the Dead Sea. You'll have the rest of the day free to bathe in the salt lake, whose unique conditions allow you to float without having to know how to swim. At midday, we'll enjoy a delicious lunch on the shores of the Dead Sea - the best way to build up strength after a hard morning relaxing! In the afternoon, you'll be left to explore the lakeside area at your own pace before we meet back up again for the return journey to the hotel in Amman, where we'll have dinner and spend the night.

Having had breakfast at the hotel, we'll embark on a panoramic tour of Amman, delving into the city's history as we explore its important monuments. We'll visit the iconic Archaeological Museum and the Amman Citadel to get an incomparable understanding of the country's ancient past. The citadel, which is home to the ruins of the Temple of Hercules, will allow us to learn about the societies that lived in this area of the Middle East. We'll also make a stop at the nearby Roman Theatre of Amman, a monumental reminder of the city under the Roman Empire.

We'll then head to the north towards Jerash, a city whose history dates back to at least 5,500 BC. Known as the "Pompeii of the East", the ancient imperial city is still home to the remarkable ruins of the Temple of Artemis and the Agora, amongst other extraordinary historic sites. At the end of your fascinating guided tour of the Jerash archaeological complex, you'll have free time to have lunch (not included). In the afternoon, we'll visit the Castle of Ajloun, a Medieval fortress with a legendary history, before returning to the hotel in Amman.

Enjoy a hearty breakfast in the hotel in Amman before setting off to the south, in the direction of the town of Madaba. We'll learn all about the connection this town has with the Bible, before heading to Mount Nebo, the peak from which Moses first saw the Promised Lands according to the Holy Scriptures. Our route will then continue to Shoubak Castle, an imposing Crusader fortress located in the Arabah Valley. There will be free time in Shoubak for you to buy lunch, before we head onwards to the hotel in Petra.

Energised after a good breakfast at the hotel, we'll begin our guided tour of the incredible archaeological site of Petra. Throughout our English-language tour of the ancient royal capital of the Nabateans, we'll delve deep into the history of the desert town. After admiring the Obelisk Tomb, we'll walk between the narrow, steep walls of the Al-Siq Canyon, leading us to the jewel of the city: the Treasury of Petra. Do you know why it was built? We'll reveal why as we marvel at its spectacular rock-carved architecture. Our tour of Petra will come to an end after visiting the theatre and the enormous Deir Monastery, and we'll then head back to the hotel to spend the night.

After breakfast, we'll leave our hotel in Petra behind and make our way to the so-called Little Petra. Like its big sister, this archaeological site was also a Nabatean settlement, and you'll get to see its temples and other buildings carved into the sandstone of the desert. Having explored the ancient town to your heart's content, we'll head into the desert to embrace the natural landscapes of Jordan. Arriving in the breathtakingly beautiful Wadi Rum valley, we'll get to let off steam and experience an unforgettable adrenaline rush enjoying the views of dunes and rock formations on a 4x4 off-road Jeep tour.

At the end of a packed day, we'll make the journey back to the hotel in Amman where we stayed for the first three nights of the tour.

You'll have free time in the Jordanian capital today to see the monuments and museums that interest you the most, or to explore further on an additional excursion or guided tour (not included).

Having had one last breakfast in Amman, it'll be time to say goodbye. Those who wish to may choose to stay more days on their own in the city.

This eight-day tour includes seven nights' half-board accommodation in Jordan: five in Amman and two in Petra, including breakfast and dinner. When making your reservation, you'll have the choice between 4 and 5 star hotels. The planned accommodation is the following:

The price indicated is per person based on two people sharing a double room. We also have single and triple rooms available: contact us to confirm availability.

Children under 2 years old go free, and children between 3 and 10 years old receive a 50% discount on the adult price provided they stay in the same room as their parents. Children over 11 years old must pay adult price.

The seven nights' accommodation includes breakfasts and dinners at the hotels. One lunch, when we're at the Dead Sea on the second day of the tour, is also included. No other food is included and should be paid for separately.

When making your reservation, you'll be asked to choose between being collected from Amman Queen Alia Airport or from a central hotel in the Jordanian capital.

Visas are required by all visitors to enter Jordan. These are acquired on arrival in the country (whether at the international airports or at most land borders) and cost 40 Jordanian Dinar (approximately 60 US Dollars) for most nationalities. Visas are not included in the price of this tour.

What do I need to do this tour?

All you need is return flights to and from Amman, arriving on the first day that you've booked for this tour, and returning the same day one week later - so if you arrive on a Monday, you should depart the following Monday. Aside from that, we'll take care of everything!

Entrance fees to all visited sites.

7 nights half board accommodation in Jordan (5 in Amman and 2 in Petra) of the selected category, including breakfasts and dinners.

Lunch at the Dead Sea.

All tours and guided visits as described in the itinerary.

You can book up to 15 days before (Amman local time) if there are still places available.

from
US$ 800
No hidden fees or surcharges
Book

The tour was excellent. Highly recommended. Everything contracted was fulfilled. They were waiting for us at the airport and took us to the hotel. My good service. The guide who accompanied us throughout the Marcos tour was wonderful. Excellent guide and organizer. All very positive Opinion translated. Show original.

Overall, the organization was fine. Just indicate that if you travel from another place other than Madrid to Barcelona, airport pickup is not included. On the other hand, for this activity it was not necessary to obtain a visa. Thanks to the fact that I hired the reception and transfer from the airport, I was able to learn that a visa was not necessary, an aspect that was not indicated to me by Civitatis. The only visit that could be improved is the WAdi Ram (only a walk outside the reserve). Opinion translated. Show original.

Very well organized and the management of the Haldoun guide impeccable. Please note that the bank holiday day in Jordan is Friday, so preferably avoid the day off in Amman on that day. Our guide redeemed us for one night in Amman for one night in a camp in Wadi Rum. Opinion translated. Show original.

8.10 / 10 30 reviews
Travel back in time visiting the ancient Rose City. Ride through a narrow gorge on horseback to discover Petra, the iconic rock-cut desert metropolis.
US$ 380 per group
Book
like

9 / 10 2 reviews
Discover the incredible mosaics of Madaba and enjoy the panoramic views of the Holy Land from Mount Nebo with this trip to Jordan's biblical past.
US$ 334 per group
Book
like

9.50 / 10 17 reviews
Get to know Jerash, the so-called "Pompeii of the East", enjoy a panoramic tour of Amman and visit the Medieval Ajloun Castle on this day trip.
US$ 340 per group
Book