This 12 day tour of Georgia, Armenia and Azerbaijan will take you from Baku to Yerevan through the most magnificent locations in the Caucasus Mountains. 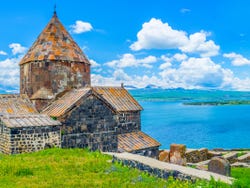 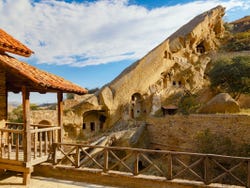 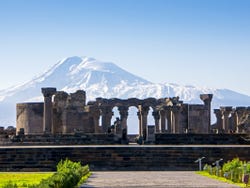 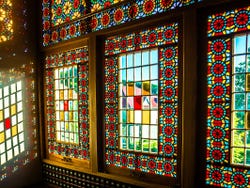 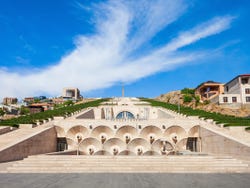 When you land in Baku, we'll be waiting for you in the arrivals terminal to take you to the hotel where you'll be staying. You'll then have the rest of the day free.

After having breakfast at the hotel, we'll set off for the Absheron Peninsula, one of Azerbaijan's most popular areas among tourists. First, we'll head into Gobustan National Park, declared a World Heritage Site by UNESCO. Here we'll marvel at the famous mud volcanoes and admire some of its over 6,000 cave paintings.

On the way back to Baku, we'll stop in Ateshgah, known as the Fire Temple. Any idea why it's called that? Find out on the tour!

At the end of the day, we'll drop you off at the hotel in Baku.

After breakfast, we'll set off for Shaki. On the way, we'll stop at Shamakhi, one of the main cities on the Silk Road. There we'll visit the mausoleum of Yeddi Gumbaz, which was built in the early 18th century for the last Khan family of this region.

We'll then continue our journey to Shaki, taking you to the hotel when we arrive.

We'll have breakfast at the hotel and then go on a tour of Shaki, the oldest city in Azerbaijan. Did you know it was the international centre of silk production for 20 years? We'll learn about its history by visiting some of its most important sites, including the Palace of Shaki Khans.

Later, we'll head to Lagodekhi, where the border with Georgia is located. There you'll be driven to a local winery for a tasting of the country's typical wine. Afterwards, we'll visit the Alaverdi Monastery, before making our way to Telavi to explore its streets and the local market.

We'll stay with a local family and enjoy a traditional Azerbaijani dinner.

After enjoying a delicious breakfast, we'll set off on a trip to David Gareja, a Georgian-style monastery whose origins date back to the 5th century. Here we'll also visit the Lavra and Ubabno monasteries. In the latter, we'll admire its painted caves and stunning views of the valley.

We'll end the day in Tbilisi, Georgia's capital, where we'll stay for the next three nights.

The sixth day will be devoted to exploring Tbilisi. After having breakfast at the hotel, we'll go to the historic centre of the Georgian capital and learn all about the history of one of the few places in the world where an Orthodox church, a Catholic church, a synagogue and a mosque coexist!

We'll finish by walking along Shota Rustaveli Avenue and dropping you off at your hotel.

After breakfast at the hotel, we'll head north of Tbilisi. The first stop of the day will be in Mtskheta, the former capital of the country and a UNESCO World Heritage Site. There we'll visit the Jvari Monastery and the Svetitskhoveli Cathedral, whose name translates to "pillar of life". You'll find out why on the tour!

Our next destination will be Gori, founded by King David the Builder. We'll stop outside the Stalin Museum to take some pictures and continue the route to Uplistsikhe, an ancient cave city.

At the end of the tour, we'll drop you back at the hotel in Tbilisi.

We'll have breakfast at the hotel and leave the capital of Georgia behind as we set off for Armenia. Our first stop will be Dilijan where we'll visit fascinating handicraft workshops.

Later, we'll make our way to Lake Sevan, which covers 5% of the surface of the country. It's over 2,000 meters above sea level and is the second-highest freshwater lake in the world! Then we'll visit the Sevanavank Monastery, located on the shores of Lake Sevan.

After breakfast, we'll leave the hotel and head to Echmiadzin, Armenia's holy city and the seat of the Katholikos, the head of the country's Apostolic Church. We'll visit the museum, where a fragment of "Noah's Ark" is still preserved.

On the way back to Yerevan, we'll stop at the ruins of the Zvartnots Cathedral, considered a gem of 7th-century architecture and declared a World Heritage Site by UNESCO.

After a hearty breakfast at the hotel, we'll set out for the Temple of Garni, the only example of pagan culture in the country and former summer residence of Armenian royalty. Afterwards, we'll go to see how lavash is made.

The Gueghard Monastery will be the next stop on our tour, a masterpiece of Armenian architecture from the 13th century.

At the end of the day we'll head back to Yerevan and drop you off at your hotel.

We'll have breakfast at the hotel and spend the day exploring the most emblematic places in Yerevan, known as the "pink city" because of the colour of its buildings. We'll visit the Republic Square, Abovyan Street and the Cascade, a giant stairway at the bottom of which the Cafesjian Center for the Arts is located. Then we'll take you on a panoramic tour of the city.

Afterwards, we'll head to the History Museum and the Matenadaran museum of manuscripts to delve deeper into the history of the 1915 genocide in Armenia. We'll also visit the Memorial Park and the famous local market Vernissage. At the end of the tour, we'll return to the hotel.

You'll have the day free in Yerevan and, depending on your flight departure time, we'll pick you up from your hotel to take you to the airport.

The only thing you need to book the tour package is a one-way flight to Baku, arriving on the day you've booked, plus a return flight from Yerevan eleven days later. For example, if you arrive on a Wednesday, you'll need to book your return flight for the Sunday of the following week.

When booking the tour package, you can choose whether you want to stay in standard (3*) or luxury (4*) hotels with half board. The hotels will be the following or similar:

11 nights half board accommodation.

Visa for Azerbaijan (25 EUR per person).

You can book up until 10 days before the activity as long as there are still places. Book now to guarantee your spot.

Free! Free cancellation up to 10 days before the day of the activity. If you cancel under this time or do not show up, you will not be refunded.
like Free

No rating yet
Discover all the essential sights of Baku with this fantastic free tour of the enchanting capital of Azerbaijan.
Free!
Book
like

8 / 10 1 review
Explore the history and craftwork of Azerbaijan with this private tour of the National History Museum and the interesting Carpet Museum.
US$ 136.50 per group
Book
like

10 / 10 2 reviews
There is no better way to discover the most emblematic places in the historic centre of the capital of Azerbaijan than on this guided tour.
US$ 50 per group
Book