Stories of prostitution and sex spectacles, murders and more... discover the sordid and depraved side of Barcelona with this guided tour.

Stories of prostitution and sex spectacles, murders and more... discover the sordid and depraved side of Barcelona with this guided tour. 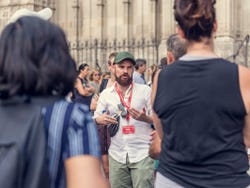 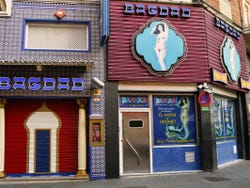 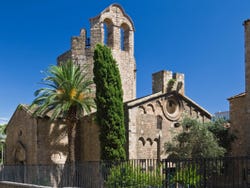 By day maybe you would see her begging, dressed in rags. But by night she graced luxurious galas in the Liceu and other exclusive spots in Barcelona. This was the double life of Enriqueta Martí, otherwise known as the Vampire of Raval. Who was this person in reality, accused of the prostitution and murder of various children in the Catalan capital? We'll begin by discovering the end of this story, at the Jaume I metro station, the start point of our tour of Barcelona's more depraved side...

As we explore El Raval, we'll tell stories of the vampire, who died in 1913 but is still remembered in books and television.

Around the corner from this symbol of hedonistic, libertine, Barcelona stands one of the best conserved Roman religious monuments in the city: the Sant Pau del Camp monastery. You'd think that monks and sex were incompatible... or are they?

Due to the nature of the tour it's not recommended for under 16s.

View complete description
US$ 15.80
Free cancellation up to 6 hours before the service starts
Book

10 / 10 2 reviews
Travel back to the 9th century and delve into the Roman vestiges of Cardona Castle, a medieval jewel very close to Barcelona.
US$ 107.50
Book
like

7.80 / 10 50 reviews
Embark on a guided tour of Girona, discovering its most emblematic landmarks and exploring filming locations from Game of Thrones.
US$ 62.20
Book