One of the oldest cities in the United States, Boston is home to incredible history. Discover its most important monuments, iconic buildings and fascinating corners on this guided walking tour. 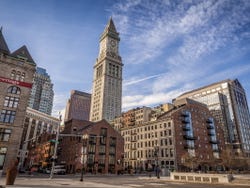 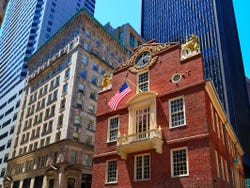 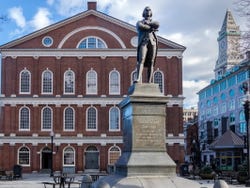 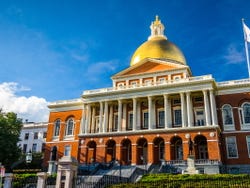 Meet your guide at the scheduled time at the Aquarium T Station, which is located next to the historic Long Wharf, an early 18th century pier. From here, you'll set off on your guided walking tour of the most emblematic sights in Boston, one of the oldest cities in the United States.

Your route will first take you to Rose Kennedy Greenway, one of the Boston's largest parks, an urban space which stretches over a mile (1.6 km) through the city's different neighbourhoods. Stroll down State Street, reaching the historic Custom House Tower, a lofty skyscraper in the Financial District.

The guided tour of Boston will continue visiting the 19th century Quincy Market and Faneuil Hall, a marketplace and meeting hall from the mid-1700s. The latter has gained the nickname "the cradle of liberty", and you'll surely recognise the names of those who used the hall for their speeches... do Samuel Adams and James Otis ring a bell?

Delving deeper into the history of the birthplace of the American Revolution, you'll arrive in the heart of Downtown Boston, reaching the Old State House. One of the oldest buildings in the country, it was the site of the tragic Boston Massacre in 1770, which "laid the foundation" for American independence from Britain.

Next, you'll make a stop at the historic King's Chapel Burying Ground, founded in 1630 as the first cemetery in the city, and the 18th century temple of the same name, the country's first Anglican church. Incredibly, the bell that still rings at each church service was recast in 1814 by Paul Revere himself.

At this point in the tour, you'll have the opportunity to take a well-deserved break from the legendary history of Boston, stopping in a traditional bar to enjoy a refreshing local beer (or a non-alcoholic drink, if you'd prefer). Your guide will continue entertaining you with curious facts and tales about the city.

With renewed energy, head on to the next stop on your tour: the 'new' Massachusetts State House. Constructed in the 18th century, the elegant building boasts a beautiful gilded copper dome. Views of the historic government building contrast magnificently with Boston's contemporary high-rise skyline, which includes the minimalist John Hancock Tower, the tallest building in New England.

Drawing your guided tour to a close, you'll wander through the picturesque streets of Beacon Hill to admire the neighbourhood's historic houses - the perfect finishing touch to your Boston visit.

One drink per person.

8 / 10 6 reviews
The Go Boston Pass is a tourist sightseeing pass with free access to over 40 attractions in Boston, including the Fenway Park and the Salem Witches Museum.
US$ 76
Book
like

No rating yet
Enjoy a unique experience in the capital of Massachusetts with this Boston Whale Watching Cruise. You'll only be a couple of feet away from the huge mammals.
US$ 62.84
Book