Discover the history behind "bandé dessinée", the ninth art, in the Belgian capital with this Brussels Comic Tour. Explore the urban vignettes of the city and wander past famous characters.

Discover the history behind "bandé dessinée", the ninth art, in the Belgian capital with this Brussels Comic Tour. Explore the urban vignettes of the city and wander past famous characters. 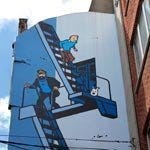 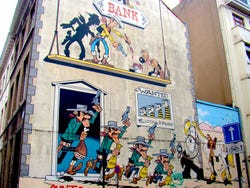 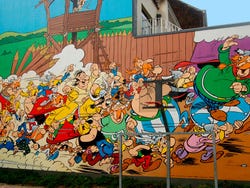 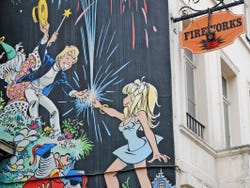 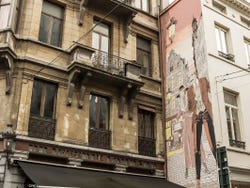 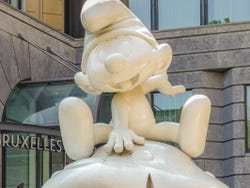 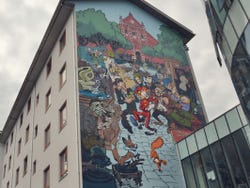 We'll meet at 10.30 am on the Grand Place to start our three-hour walking tour of the most famous comic strip buildings in Brussels.

The first mural will be on rue de l'Étuve, Tintin, Snowy and Captain Haddock coming down some stairs. Hergé's endearing characters leave the vignettes of his illustrated adventure "The Calculus Affair". It seems that they go down to visit the sculpture of the Manneken Pis, located a few metres away.

Once we've seen the famous child, we'll discover a wall with the characters of Olivier Rameau, the comic book created by the Belgian cartoonist Dany. Shortly afterwards we'll be surprised by some peculiar columns, The Passage, the iconic mural of Schuiten.

Some bandits will interrupt our walk in the rue de la Buanderie, so don't panic! It's the Dalton brothers being chased by Lucky Luke, Morris' most famous comic book character. On this same street, we shouldn't be afraid of some crazy warriors running towards us either. This is Asterix and Obelix trying to escape from a wall.

We'll also visit the murals of famous comic book artists Frank Pé, Victor Sackville and Marc Sleen, among others, and take a brief look at the work of these cartoonists next to the Musée du Comique in Brussels. The tour will end at the Smurf statue, located three minutes from the Grand Place.

€ 35
Free cancellation up to 5 days before
Book

9.20 / 10 742 reviews
Take a 2.5-hour free tour of Brussels and discover the main sights as you learn about the history of the landmarks accompanied by an English-speaking guide.
Free!
Book
like

9.50 / 10 6,348 reviews
Ghent and Bruges are two of the best preserved medieval cities in Europe and two of the most-visited towns in Belgium. Take a full day trip.
€ 43
Book
like

9.10 / 10 13 reviews
Set off on a day trip to Luxembourg, one of the less-known cities of Europe and on your way back to Brussels stopping at Les Ardennes and the city of Dinant.
€ 63
Book