Tour the most beautiful areas around the Argentine capital with this Buenos Aires Bike Tour. You can choose between a route in the north, in the south or in both areas of Buenos Aires.

Tour the most beautiful areas around the Argentine capital with this Buenos Aires Bike Tour. You can choose between a route in the north, in the south or in both areas of Buenos Aires. 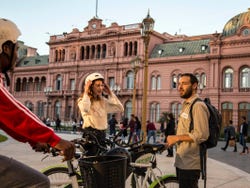 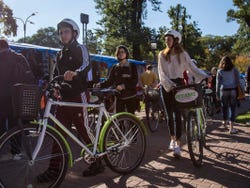 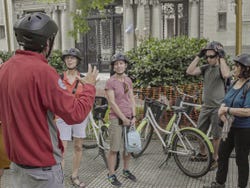 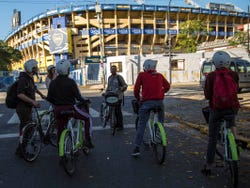 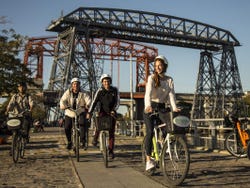 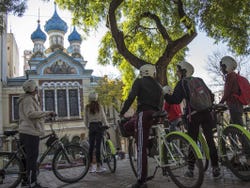 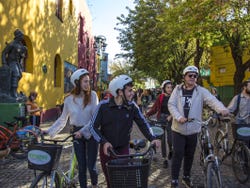 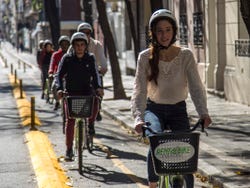 When you make your reservation, you can choose one of the following routes. All of them will start at the time indicated in Calle Chile in Buenos Aires and will end at this same point.

We'll start this South Buenos Aires bike tour at 10 am. First, we'll pedal through the neighbourhood of San Telmo, one of the most beautiful in the Argentine capital. We'll stop at Lezama Park to learn about the history of the first foundation of Buenos Aires.

Then we'll go to the La Boca neighbourhood to see the outside of the famous Alberto José Armando stadium. This venue, home of the Boca Juniors Athletic Club, is better known as "La Bombonera". We'll follow the route through La Boca in the colourful Caminito passage, where we'll tell you about the history of Argentine tango.

The tour will continue through the modern area of Puerto Madero, where we'll visit the Costanera Sur Ecological Reserve. Our final stop will be at the central Plaza de Mayo to admire its most significant buildings, such as the Casa Rosada and the Metropolitan Cathedral of Buenos Aires.

At 2 pm, we'll leave from the meeting point to tour the centre of Buenos Aires. We'll follow the route in one of the most outstanding northern districts of the Argentine capital. In the Retiro, we'll stop to learn about the history of its bustling General San Martín Square.

The tour will continue in the north of Buenos Aires in the neighbourhood of Recoleta, where the famous cemetery of the same name is located. After a brief visit to the cemetery, we'll continue to the Palermo neighbourhood to see its forests and rose garden. We'll make the last stop before the Argentine Congress, the great legislative chamber of the country.

We'll meet at 10 am and start by taking the same route as the South Buenos Aires bike tour.

At 2 pm we'll take a break in a centrally located restaurant in the Argentine capital to have lunch consisting of a main course, to choose between a meat sandwich, pork fillet or Milanese with a side of chips or salad. You can also choose a salad, a plate of homemade pasta or some crepes with vegetables. The menu includes dessert, a non-alcoholic drink and coffee.

After lunch, we'll visit Plaza de Mayo and follow the same itinerary as the North Buenos Aires bike tour, visiting the Retiro, Recoleta and Palermo areas. After the last stop at Plaza del Congreso, at 5 pm we'll return to the starting point.

Lunch (according to option).

7% discount on the official ticket price.

9.50 / 10 280 reviews
Want to know the origin of the Argentinian capital? This free walking tour of Buenos Aires is the best way to get to know its historic centre.
Free!
Book
like

9.20 / 10 13 reviews
Discover the best spots in Buenos Aires with this private tour around the capital city with a private guide for you, your partner, family or friends.
US$ 252.70 per group
Book
like

10 / 10 1 review
The La Boca walking tour takes you around one of the most colourful and traditional neighbourhoods in Buenos Aires, where the people breathe football and tango
US$ 10
Book