Do you want to follow the path taken by Jorge Bergoglio before he became the “Pope from the end of the World”? Discover what the early life of Pope Francisco was like in Buenos Aires with this sightseeing tour. 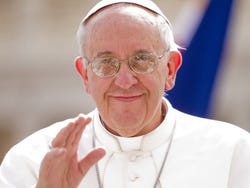 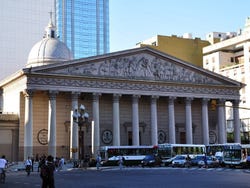 The journey through the life of Jorge Bergoglio starts at 10 am at his birthplace in the renowned Flores neighborhood. This is where Jorge spent his formative years with his parents and four siblings.

We will tour the buildings which shaped his education and where he received the first sacraments which awoke his religious calling. We visit the places that he frequented in his youth and, at San Lorenzo de Almagro Football Club, we will learn about how his passion for football started.

We will stop at the Church of San Francisco de Asis, where Bergoglio discovered the Franciscan Order from which his papal name is taken. We also visit the San José de Flores church, where at only 17 years old, he decided to dedicate his life to God.

Our last stop is the Buenos Aires Metropolitan Cathedral, where thousands of Argentines convened to await the results of the conclave in which Bergoglio was elected successor to PopeBenedict XVI.

The tour ends around 1 pm in Plaza de Mayo.

You can book up until the previous day (5:00 PM local time) if there are still places available.

US$ 44.40
No hidden fees or surcharges
Free cancellation up to 3 days before
Book

8.80 / 10 65 reviews
Get to know every corner of magnificent Buenos Aires with this comprehensive sightseeing tour around the capital followed by a cruise on the River Plate.
US$ 59
Book
like

10 / 10 1 review
The La Boca walking tour takes you around one of the most colourful and traditional neighbourhoods in Buenos Aires, where the people breathe football and tango
US$ 10
Book
like Free

9.40 / 10 265 reviews
Want to know the origin of the Argentinian capital? This free walking tour of Buenos Aires is the best way to get to know its historic centre.
Free!
Book