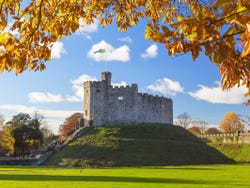 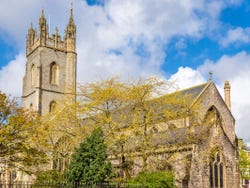 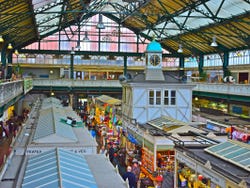 Meet your guide at 11 am next to the statue of John Batchelor located in The Hayes, a pedestrianised area in the heart of Cardiff city centre. From here, you'll make your way over to Bute Park, the city's green lung. Did you know it is one of the largest parks in Wales?

Cardiff claims to have the highest concentration of castles of any city in the world, and not far from Bute Park you'll reach one of the most famous: Cardiff Castle, an important symbol of Wales. Make a stop here to take in the views of the majestic façade of the building, which is a Victorian Gothic Revival mansion built on top of an 11th century Norman castle, which was constructed upon the ruins of a 3rd century Roman fort! Discover what remains of the Roman wall, the Medieval fortress and the Clocktower as you explore this historic site. You'll also learn about the Bute family and Owain Glyndŵr, who was the last Welshman to hold the title of Price of Wales.

Head to Principality Stadium next, a favourite spot for sports fans. Do you know which event it was constructed for? Wandering through the picturesque streets of the Castle Quarter, you'll pay a visit to Cardiff Central Market. This Victorian market has been open since the late 19th century, and is packed with food stalls selling typical local produce and delicacies.

Discover one of the city's typical pubs and hear all about its namesake, Aneurin Bevan, before you make your way over to the emblematic Church of St John the Baptist, the only one in the city which dates back to pre-Medieval times. On the walk over, your guide will tell you some fascinating facts about the Welsh language!

Finally, you'll pay a visit to Cardiff's traditional Victorian and Edwardian shopping arcades, an iconic feature for which the city is famous. The most well-known, the Royal Arcade, has welcomed shoppers since 1858.

Your free walking tour of Cardiff will come to end at 1:30 pm in the city centre.

Please note: it is not possible to reserve this free walking tour of Cardiff for groups of more than 6 people.

Eugene was a really nice guy but I think we did not see in the tour all the nicest part of the city. We stayed long time standing up in a few stops and the histories that he told us was not very interesting for us...like spend 20 minutes just telling about the stadium and rugby or the tallest building in the city that is very ugly...was ok but it was not the best.

10 / 10 4 reviews
Historic buildings, sea views and a hotel that doubles as a museum: join us in discovering the best of Cardiff Bay on this free walking tour!
Free!
Book
like

9.10 / 10 9 reviews
Discover the capital of Wales with the Cardiff Sightseeing Bus. You can hop on and hop off at any of the stops to explore the main attractions of the city.
US$ 17.50
Book
like

9.50 / 10 4 reviews
With more than 2,000 years of history, the Cardiff castle is a must-see in Wales. Live its history, from Roman origins to its impressive gothic transformation.
US$ 16.80
Book