Buddhist temples, beautiful nature and Thai culture: explore Chiang Rai and discover its charms on this guided tour of the city's most spectacular places of interest.

Check out all the activities in Chiang Rai

Buddhist temples, beautiful nature and Thai culture: explore Chiang Rai and discover its charms on this guided tour of the city's most spectacular places of interest. 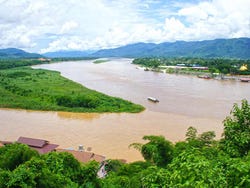 After being picked up from your hotel at 8:30 am on the day of your tour, you'll set off on your guided tour of Chiang Rai.

Thailand's northernmost province is home to enchanting architecture and fascinating culture representing the fusion of Thai and Burmese styles on their joint border. You'll soon bear witness to this as we make our first stop at Wat Phra Kaew, a magnificent Buddhist temple built in the 14th century under the Lanna Empire. It was here that the revered Emerald Buddha was discovered, later being moved to Bangkok. You'll be able to see a replica of the statue as you visit the temple.

Having been truly captivated by the architectural and religious details of Wat Phra Kaew, we'll head onwards to the riverside for the next part of our tour of Chiang Rai. Setting sail on a traditional long tail boat, we'll get to see the Thai city from a new perspective as we cruise along the Kok River.

As well as admiring the monuments and houses dotted along the riverside, we'll also get to approach Tham Phra Cave, a sacred place where a Buddhist temple has been built inside a cave.

At the end of our four-hour long guided tour of Chiang Rai, we'll drop you back off at your hotel in the city centre.

View complete description
US$ 50.80
Free cancellation up to 3 days before
Book

Check out all the activities in Chiang Rai

7.50 / 10 89 reviews
If during your trip in Bangkok you want to connect to the Internet and keep in touch with your family and friends, this card is perfect for you.
US$ 18.50
Book
like

No rating yet
Discover the mountain landscapes of northern Thailand trekking in Chiang Rai. Spend 2 or 3 days exploring rice paddies, tea plantations and rural villages.
US$ 289.20 per group
Book
like

No rating yet
If you'd like to have a fun-filled day of adventure, our Chiang Rai Buggy & Kayak Tour is a great fit for you! You'll drive a buggy through the outskirts of Chiang Rai and row down the Kok River
US$ 180.70
Book