Imperial tombs, an ancient citadel and the Perfume River winding through the city. Discover Hue, the former capital of Vietnam, on this tour from Da Nang.

Imperial tombs, an ancient citadel and the Perfume River winding through the city. Discover Hue, the former capital of Vietnam, on this tour from Da Nang. 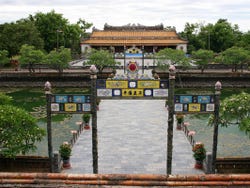 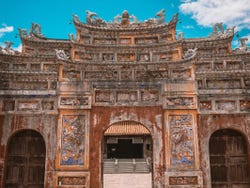 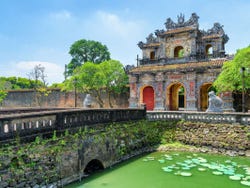 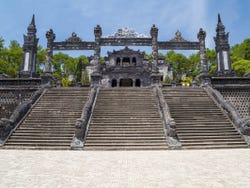 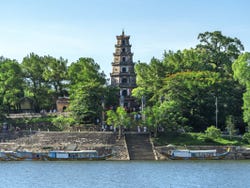 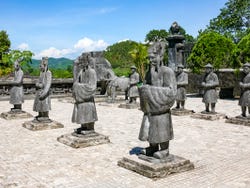 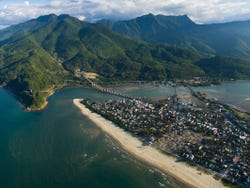 Bright and early at between 8 and 8:15 am on the day of your excursion, we'll pick you up from your hotel in Da Nang and head towards the north by bus. Our two-hour drive will bring us to Hue, the former Vietnamese imperial capital, an architectural delight located on the banks of the Perfume River.

On the way, we'll cross the famous Hai Van, or 'ocean cloud' pass, making a brief stop in Lang Co beach - considered one of Vietnam's most beautiful bays.

Then our journey continues to Hue, and having arrived we'll fuel up with a delicious lunch in a local restaurant.

Having eaten, we'll visit the imperial tomb of Khai Dinh. With golden dragons on each side, the buildings in fact display striking and surprising similarities with Western architecture. And the next stop is the Thien Mu pagoda: an impressive seven-floor tower which has become a symbol of Vietnam's architecture.

Then we'll make our way to the Hue citadel - from where Vietnamese emperors took led the country. Within the complex, you'll find the Hall of the Mandarins, the Ngo Mon, Thai Hoa Palace and the Purple Forbidden City. And for an idea of the history of the city, we'll visit the Royal Museum: a voyage through seven centuries of local craft.

The tour finishes back at your hotel in Da Nang between 6 and 6:15 pm.

This tour includes pick up in the centre of Da Nang. If you're staying in the outskirts you should make your way to the Cham museum, on Street 2 Tháng 9

This excursion to Hue was very well planned. We wanted to do it in French. We were informed the day before that a guide would take care of us in Hue and this was the case. We greatly appreciated Ngoc, who is very competent, attentive and pleasant company. We really enjoyed this visit. For the minibus journey to Hue and back, Kim Chi, a charming guide, gave a lot of information. Too bad these transports are not equipped with a translator! Opinion translated. Show original.

The excursion was excellent. Our guide Rosa is very professional. He contacted us the day before to confirm our departure. Both she and the driver were very friendly. The entire tour of the city of Hue is very interesting and we did it at a very good pace with enough time to take photos. The food included in Hue's restaurant was very good and we really enjoyed it. We highly recommend this tour. Opinion translated. Show original.

No rating yet
Don't let travelling stop you from staying in contact with your friends and family! Get unlimited Internet use during your trip to Vietnam with this Travel SIM.
US$ 9
Book
like

9.50 / 10 4 reviews
Spectacular views; the world's longest cable car and the iconic Golden Bridge: make the most of your time in Da Nang on this private day trip to Ba Na Hills.
US$ 267.50 per group
Book
like

No rating yet
Enjoy shopping in Da Nang's traditional markets and experience a day in the life of the city's locals. Find ​typical Vietnamese foods, handicrafts, and more.
US$ 31.90
Book