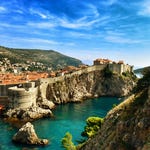 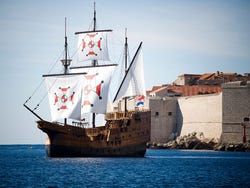 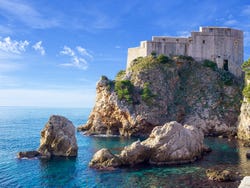 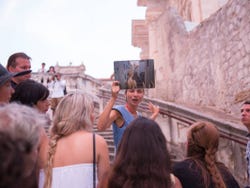 Game of Thrones Cruise of Dubrovnik

As evening falls we embark on the Karaka, the boat with which Daenerys set sail at the end of the sixth series of Game of Thrones. Our cruise begins next to the walls of old Dubrovnik, the very same through which Varys and Tyrion passed speaking of the great game and their plans for the Seven Kingdoms.

From the luxurious deck of the sixteenth-century galleon, we'll see the calm waters of the Pile bay, in the same way as the Queen Mother saw Myrcella leave for Dorne. We'll sail alongside the Lovrijenac fort where Joffrey celebrated his Nameday and Cersi demonstrated to Meñique that 'power is power'. On the tour of the Dubrovnik coast, our guide, a major Game of Thrones fan, will point out other locations from the series, such as the Bokar and Minceta fortresses, which became Quarth's House of the Undying

During the tour, we'll offer you a special dragon blood cocktail. The boat excursion then ends in the port of the Dubrovnik old town.

You can complete the experience with an English language walking tour of the scenes of Game of Thrones. Having disembarked, we'll continue the tour of the Dubrovnik old town, where our guide will show you places such as Gradac Park where the Purple Wedding took place, or the Rupe Museum which became the brothel of Petyr Baelish, as well as details regarding the history of the buildings which were chosen to set the scene at King’s Landing.

US$ 61.30
Free cancellation up to 48 hours before the service starts
Book

9.40 / 10 1,163 reviews
Delve into the rich history of Dubrovnik on this complete guided tour of the Old Town with an expert English speaking guide, listed a UNESCO World Heritage site since 1979.
US$ 20.80
Book
like

7.70 / 10 26 reviews
From the beautiful mosques to the Marian shrine discover the experience and contrasts between Islam and Christianity with this Mostar & Medugorje Guided Tour.
US$ 63.60
Book
like

9.70 / 10 253 reviews
See the capital of the Seven Kingdoms on this walking tour of the parts of Dubrovnik where the Game of Thrones is filmed and discover the real King’s Landing.
US$ 23.10
Book