Discover the fascinating secrets of the Minoan civilisation exploring the ancient Palace of Knossos with an expert English-speaking guide. Unmissable! 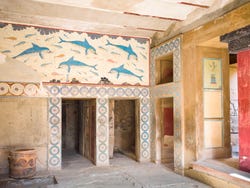 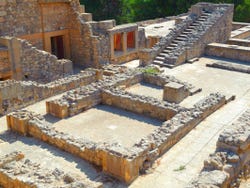 After meeting your guide at 10 am at the Palace of Knossos, you'll begin exploring this ancient residence of King Minos. The palace complex is formed of more than 1500 interconnected rooms, a confusing structure that will no doubt remind of you of the Minotaur's Labyrinth...

Discover the legend of the mythological being that terrorised the Cretans thousands of years ago. Who shut him in the labyrinth? What did he eat? Who killed him and how?

As you delve into the island's mythical past, you'll wander through the chambers of the royal family, the sanctuaries and the rooms that were home to the treasures of Crete. The Palace of Knossos is the most significant vestige of the Minoan civilisation, considered to be the most sophisticated ancient culture in Europe.

One particular example of the civilisation's advanced development is the palace's complex sewage and water system. You'll also get to see the original throne of King Minos, which remains standing even 3,500 years later. After making the most of your tour around the Palace of Knossos and admiring its spectacular frescoes, your visit will come to an end.

This price of this tour does not include the entrance fee for the Palace of Knossos (€15 per person approximately).

Guided tour of the Palace of Knossos.

Entrance to Palace of Knossos (€15 per person approximately).

If you cancel 4 days before the day of the activity, we will refund you 85%. If you cancel under this time or do not show up, you will not be refunded.

New
On this excursion to Spinalonga, discover the amazing story of leprosy patients who sought refuge in this part of Crete. You'll also visit a wine cellar!
US$ 124
Book
like New

New
Explore one of Greece's most beautiful volcanic islands on this day trip to Santorini. Visit the Caldera, Oia, Perivolos Beach and the capital city of Fira!
US$ 170.20
Book
like

No rating yet
Delve into the fascinating history of Crete: explore the most important landmarks and monuments in Heraklion on this guided walking tour.
US$ 35.20
Book