Check out all the activities in Hong Kong 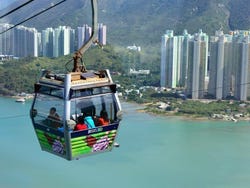 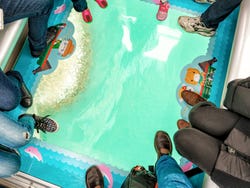 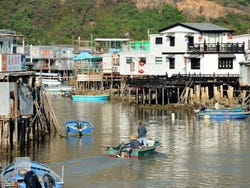 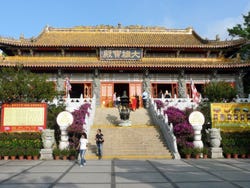 Experience the best of Hong Kong's Lantau Island on this combo tour! Firstly, you'll climb on board the Ngong Ping 360 cable car, an attraction which soars over the isle giving you incredible views over the lush greenery. During the 25-minute cable car ride, you'll fly over Ngong Ping village, the surrounding nature and spot the giant Tian Ten Buddha up in the mountains.

Having reached the peak, you'll meet up with your guide at the Li Nong Tea House, where you'll have the opportunity to watch a typical Chinese tea demonstration. You'll then hop onto a bus which will take you to Tai O, Hong Kong's oldest fishing village.

You'll then embark on a boat cruise along Tai O's canals, allowing you to discover the traditional stilt houses, buildings supported just above the water by wooden poles. You'll have the chance to visit inside one of them, seeing how the locals live from day to day and how they maximise space in these ingenious constructions. A unique experience!

During your guided tour of Tai O, you'll get to sample typical local delicacies before having free time to immerse yourself in the magic of everyday life as you explore the open-air market. Exotic spices, fresh fish and handcrafted toys are just a handful of the products on offer here, and you're sure to be captivated by the enticing aromas, colourful sights and soothing sounds of the sea.

Hop on a bus back up to Ngong Ping where you'll visit the Po Lin Monastery, learning all about its history as you marvel at the Tian Ten Buddha, an enormous statue perched atop the mountain.

Following your guided tour of the village, you'll take the Ngong Ping 360 cable car back to your original departure point, enjoying the magnificent views underneath.

When making your reservation, you'll have the choice between two options for your trip on the Ngong Ping 360 cable car: the standard cabin and the crystal cabin.  The latter have glass bottoms, giving you fully panoramic views over the scenery so you feel you're flying over Hong Kong's Lantau Island.

Visit to a traditional stilt house.

Check out all the activities in Hong Kong

8.20 / 10 9 reviews
See Hong Kong lit up by night, with a guided tour of the Yau Ma Tei neighbourhood, where you'll visit one of the oldest markets in the city.
Free!
Book
like

No rating yet
The iVenture card gives you free entrance to Hong Kong and Macau's leading attractions, from iconic observation decks to a sunset cruise. Unmissable!
US$ 114.50
Book
like Free

9.50 / 10 11 reviews
This free tour of the Hong Kong financial district will reveal all the secrets of the enormous Asian metropolis and its colonial past.
Free!
Book