Travel back in time to the medieval Rajput era visiting the ancient monuments of Chand Baori and the Harshat Mata Temple, the architectural jewels of Abhaneri.

Travel back in time to the medieval Rajput era visiting the ancient monuments of Chand Baori and the Harshat Mata Temple, the architectural jewels of Abhaneri. 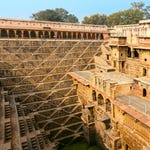 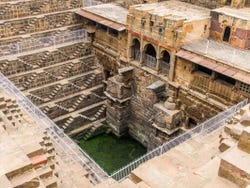 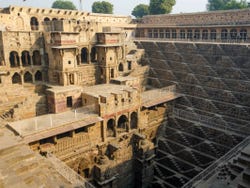 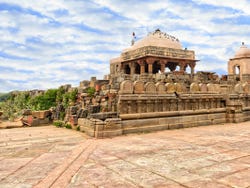 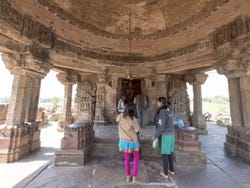 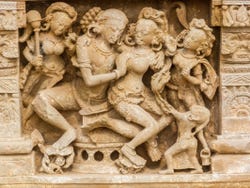 Having been picked up from your hotel in Jaipur, you'll head on your way to the east of Rajasthan.

After an approximately two hour drive, you'll arrive in the village of Abhaneri. The medieval era architecture here will allow you to delve deep into the passionate history of the Rajputs, one of the warrior castes who held control over most of what is now Rajasthan between the 6th and 12th centuries.

Your first stop will be at the beautiful Chand Baori in Abhaneri. One of the deepest and largest stepwells in India, its 3500 narrow steps lead down to a well approximately 100 feet (30 m) into the ground, where water has been stored and used for public baths for more than a thousand years. In the Middle Ages, these structures were essential to be able to make the most of the abundant water brought by the monsoons during the drier seasons. You'll learn all about the ancient techniques used in the construction of this masterpiece of engineering and architecture - the Rajputs built all of this without any of the technology we have today!

Next to Chand Baori, you'll see the Harshat Mata Temple, Abhaneri's other iconic monument. Built in the 7th and 8th centuries, the temple was invaded and heavily damaged in the 10th century; despite being partly in ruins, it is still a magnificent example of ancient Indian architecture. Inside, admire the elaborately carved stone scultpures which tell stories allowing you to explore the Hindu religion and culture.

Finishing up your fascinating tour, you'll head to a local restaurant where you can have a well-deserved rest and enjoy delicious typical Indian cuisine (not included). After eating, you'll return to your hotel in Jaipur.

Private and exclusive tour, there will not be any other people in the group.

Per group from
US$ 178.20
Free cancellation up to 3 days before
Book

Free! Free cancellation up to 3 days before the day of the activity. If you cancel under this time, you will be refunded 98%. If you do not show up, you will not be refunded.
like

8.30 / 10 56 reviews
This guided walking tour is the best way to explore the most iconic areas of Jaipur and get your bearings in the Rajasthani capital.
Free!
Book
like

No rating yet
Experience Jaipur nightlife and explore the city's liveliest hot spots on this pub crawl. You'll discover the places where the locals like to go and how the city parties!
US$ 19.90
Book
like

Traditional Dinner with an Indian Family

10 / 10 1 review
Enjoy the unique cultural experience of sharing dinner with a traditional Indian family. Savour their delicious food and learn all about the country’s customs.
US$ 23.10
Book