Renowned for their beautiful Hindu and Muslim temples, Puskar and Ajmer are two of Rajasthan's most sacred cities. Discover them on this fascinating private tour!

Renowned for their beautiful Hindu and Muslim temples, Puskar and Ajmer are two of Rajasthan's most sacred cities. Discover them on this fascinating private tour! 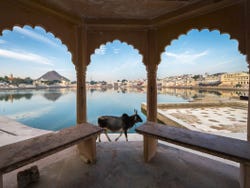 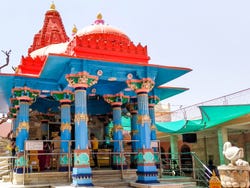 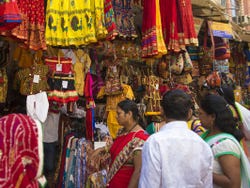 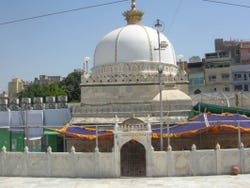 After being picked up from your hotel in Jaipur, you'll head into the heart of the Indian state of Rajasthan.

Your first stop will be in the sacred city of Pushkar, considered one of the country's oldest settlements. Its origins are surrounded by a number of legends, but its location is generally agreed to have been chosen when Lord Brahma, the Hindu creator of the universe, dropped a lotus flower into the valley, where a holy lake then emerged. The Jagatpita Brahma Mandir, one of very few existing temples dedicated to the deity, was built in the place where Brahma is said to have performed a yagna or ritual offering. Discover some of the customs and traditions of Hinduism inside the colourful temple.

Just a five minute walk away from the Brahma Temple, you'll reach the sacred Pushkar lake. Watch as locals flock to the lakeside ghats, sloping steps leading down to the water, where purification rituals and bathing take place.

Continue your tour with a brief stroll over to Pushkar market, where you'll find numerous stalls selling handicrafts and other typically Indian handmade items. After exploring the bazaar, you'll have free time to enjoy some lunch (not included).

After eating, you'll head to the nearby city of Ajmer. Another city of incredible religious tradition, Ajmer is home to the iconic Dargah Sharif, a shrine dedicated to the revered Muslim saint Moinuddin Chishti. You'll have the opportunity to enter the monument and admire the mythical beauty within.

From Ajmer, you'll head back to your hotel in Jaipur.

Exclusive private tour: there will be no other people in the group.

Per group from
US$ 173.90
Free cancellation up to 3 days before
Book

Free! Free cancellation up to 3 days before the day of the activity. If you cancel under this time, you will be refunded 98%. If you do not show up, you will not be refunded.

8.30 / 10 56 reviews
This guided walking tour is the best way to explore the most iconic areas of Jaipur and get your bearings in the Rajasthani capital.
Free!
Book
like

No rating yet
Experience Jaipur nightlife and explore the city's liveliest hot spots on this pub crawl. You'll discover the places where the locals like to go and how the city parties!
US$ 20
Book
like

Traditional Dinner with an Indian Family

10 / 10 1 review
Enjoy the unique cultural experience of sharing dinner with a traditional Indian family. Savour their delicious food and learn all about the country’s customs.
US$ 22.50
Book