Explore Jaipur's most iconic sacred sites on this unforgettable tour of the Pink City's temples. Discover the Monkey Temple and Birla Mandir. Unmissable! 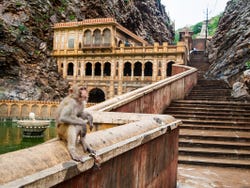 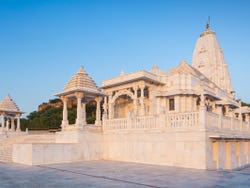 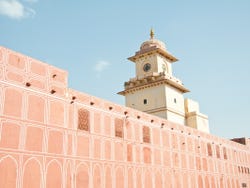 You'll be picked up from your hotel in Jaipur first thing in the morning, ready to start exploring the most important temples in the Rajasthani capital. Ready to get lost in the diverse holy sanctuaries of India, the birthplace of four of the world's major religions?

Your first stop will be Galtaji, an ancient Hindu pilgrimage site built into the Aravalli Hills just over 6 miles from Jaipur city centre. The complex includes a number of temples and water tanks, filled by sacred springs from the mountains, in which pilgrims bathe and perform purification rituals. The Hanuman temple is particularly special: it is also called the Monkey Temple as these friendly primates have made it their home. Climbing up to the hilltop shrines will afford you the most spectacular views over Jaipur - don't forget your camera!

After exploring Galtaji, you'll meet back at the bus to head to your next stop: Jahat Shiromani. Not far from the iconic Amber Fort, the construction of this Hindu temple was ordered by Queen Kanakwati at the end of the 16th century in memory of her son Jagat Singh. From this intricately carved shrine, you'll make your way to Kale Hanuman Ji and Govind Dev Ji.

Continuing your route around the temples of the Rajasthani capital, you'll visit the Birla Mandir. Located on elevated ground at the Moti Dungari hill, this beautiful Hindu sanctuary is surrounded by luscious gardens. As the gleaming white marble architecture captivates you, learn all about the symbolism of the temple's three domes, representing the three ways of approaching the religion.

You'll finish your tour seeing Akshardham and Lakshminarayan temples, and for the finishing touch on this fascinating route you'll visit Hawa Mahal, the gloriously elaborate pink sandstone building also known as Jaipur's Palace of the Winds.

Please bear in mind that this tour does not include drop off back at your hotel, but will instead end in the city centre near the palace area.

Pick up from hotel.

If there are still places available, you can book until the previous day (local time in Jaipur).

US$ 45.70
No hidden fees or surcharges
Free cancellation up to 24 hours before the service starts
Book

8.30 / 10 54 reviews
This guided walking tour is the best way to explore the most iconic areas of Jaipur and get your bearings in the Rajasthani capital.
Free!
Book
like

No rating yet
Rajasthan's artisanal heritage is one of its unique attractions. Discover traditional methods of crafting rugs, fabrics and jewellery on this walking tour.
US$ 10.50
Book
like

No rating yet
Cover yourself with color at the Holi festival! Do you want to experience this unique celebration in Jaipur and dance under the rainbow clouds?
US$ 47.50 per group
Book