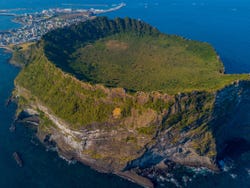 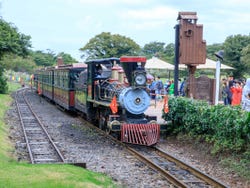 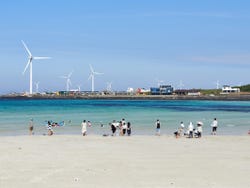 After being picked up from your selected meeting point between 7:30 am and 8:30 am, you'll set off to the east of Jeju Island, making your first stop at Ecoland, a park located in the mystical Gotjawal Forest. Here, you'll climb aboard a steam train that seems to have come straight out of the 19th century and enjoy a two and a half hour ride around the park, admiring the biodiverse plants and wildlife that live here.

After visiting Ecoland, you'll head onwards to Seongsan Ilchulbong. Also known as "Sunrise Peak", this fascinating geographical feature, said to resemble an enormous ancient castle, is located on the east coast of Jeju Island. The UNESCO World Heritage Site is a tuff cone formed by volcano eruptions around 5000 years ago: it is almost 600 feet (180 metres) tall and nearly 2000 feet (600 metres) wide, and you'll have the opportunity to climb the hiking trails that cross through its unique natural landscapes.

You'll have time to eat lunch surrounded by the beautiful countryside, before heading inland to the Manjanggul Cave. Spending around an hour in this lava tube, you'll be left speechless by the incredible stalagmites, stalactites, columns and other structures formed out of the volcanic lava. Did you know that this is considered one of the best lava tunnels in the world for its excellent condition?

Back in the open air, you'll make your way to the last stop on your tour of Jeju Island: Woljeongri Beach. Its pristine white sands and unbelievable emerald colours of the sea are the perfect place to relax after a day full of adventure.

At the end of the tour, you'll return to your original pick up point in Jeju, arriving back at around 7 pm.

This tour includes pick up from the following meeting points in Jeju:

When making your reservation, you'll be asked to select the meeting point that you'd prefer to be picked up from.

Pick up and drop off at meeting point.

You can book up to 2 days before (Jeju local time) if there are still places available. Book now to guarantee your spot.

US$ 43.60
Free cancellation up to 48 hours before the service starts
Book

No rating yet
Discover an amazing ecosystem of marine life from all around the world when you buy a ticket to the fantastic Aqua Planet Jeju aquarium.
US$ 27.30 US$ 20.20
Book
like

No rating yet
Leave the city of Jeju behind for the day and delve into the island's natural wonders on this tour of Seogwipo's mountainous, volcanic and coastal landsapes.
US$ 90
Book
like

No rating yet
Enjoy the Nanta, South Korea's most famous show, when you buy a ticket for this comedy performance of acrobatics, dance, and mime.
US$ 25.20
Book