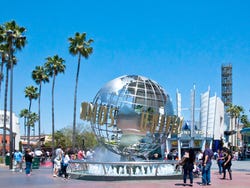 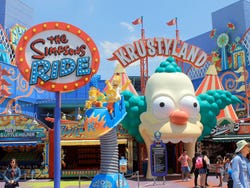 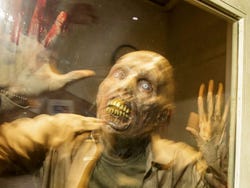 We'll pick you up from your hotel in Las Vegas between 7 and 8 am, and make our way directly to the airport, where we'll take a flight to Los Angeles. One hour later we'll be touching down at the city's aerodrome, where an Uber will be waiting for you to take you to the Universal Studios theme park.

Once we arrive at the park, known as "Los Angeles' Entertainment capital" you'll take a guided tour first of alll. Inaugurated in 1964, the studios are right next to the oldest factory in the park. You'll visit the sets where famous films such as Psycho, Back to the Future and King Kong were shot!

Having heard the stories of these unforgettable films, you'll have free time in the park to enjoy its various attractions - based on the stories and characters of famous series and films such as Harry Potter, Shrek and The Simpsons. And the bravest among you can enter the world of The Walking Dead, one of the most popular series of recent years.

And you can't miss the spectacular shows on offer! The little ones are sure to enjoy the light show over the Hogwarts castle, and for those who are looking for a shot of adrenaline, they can try out the Velociraptor encounter, a hunt for one of the most feared dinosaurs in Jurassic Park.

You can see the full map of the park clicking on the link below:

Last thing in the afternoon, your Uber will be waiting for you at the park's exit to take you back to the LA airport, where you'll take your plane back to Las Vegas, arriving at your hotel at around 9 pm.

Return transport from the airport to the park.

Tour of the park.

Food, drink and other extras in the park.

You can book up to 7 days before (Las Vegas local time) if there are still places available.

if you cancel more than 48 hours before the activity starts there is a penalty of 159USD. If you cancel under this time or do not show up, you will not be refunded.
like

9.20 / 10 21 reviews
For many, the South Rim is the most spectacular part of the Grand Canyon. On this excursion we'll fly over in a plane, take a helicopter ride, and explore the National Park by foot
US$ 364
Book
like

9.40 / 10 16 reviews
The Go Las Vegas Pass allows free access to 27 attractions in Las Vegas, including the High Roller ferris wheel, and al the main sights in the city.
US$ 139
Book
like

9.10 / 10 232 reviews
Get married in Vegas! Make your trip unforgettable, sealing your love with the King of Rock 'n' Roll as a witness in Graceland, the chapel where the tradition began
US$ 216 per group
Book