Get lost in the world of Harry Potter passing through the scenes which inspired J.K. Rowling to create her famous literary saga. Are you ready to live the magic?!

Get lost in the world of Harry Potter passing through the scenes which inspired J.K. Rowling to create her famous literary saga. Are you ready to live the magic?! 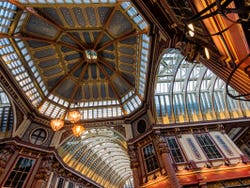 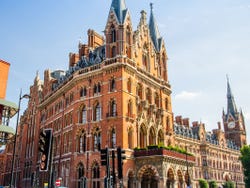 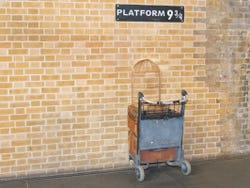 We begin our tour next to the statue of Winston Churchill in Parliament Square, to begin our two-hour visit the guide will begin explaining to you the life and trajectory of J.K. Rowling and the cinematic adaptations of her major works.

Thre tour will take in Westminster Tube Station, one of the main locations Harry uses when travelling to the Ministry of Magic, along with Mr Weasley in The Order of the Phoenix.

One of the key locations in the Harry Potter saga is the Leadenhall Market, a Victorian covered market with an ornate covered roof and quaint old world air, making it perfect as the setting for Diagon Alley, where the wizards go shopping in the Harry Potter universe. In reality, the Leaky Cauldron is an optician!

The tour also passes Leicester Square and Trafalgar Square, where all the premieres of the films took place and crowds of fans gathered to see the actors treading the red carpet; as well as both featuring in the opening scene of Harry Potter and the Half-Blood Prince when the Death Eaters swoop down over Trafalgar Square and head off along Charing Cross Road.

Having seen crucial locations in the creation of Harry Potter, including the places that inspired Hogwarts and Gringotts,  and with your head spinning with your guide's anecdotes, the tour arrives finally at Picadilly Circus, and the phone booth used to take down to the ministry of magic. Do you think it will take you down....?

The guides may adapt the visit depending on the interest of the tour participants. The order of the above-listed sights may also be subject to change.

You can book up to 2 days before (London local time) if there are still places available. Book now to guarantee your spot.

US$ 19.20
Free cancellation up to 6 hours before the service starts
Book

9 / 10 72 reviews
Experience life on the HMS Belfast, an impressive warship from World War II, moored on the River Thames and one of London’s iconic symbols.
US$ 31.10
Book
like

9.10 / 10 1,009 reviews
At The Making of Harry Potter, you can discover the original film sets, special effects, authentic props and costumes from the eight film Harry Potter series.
US$ 54.90
Book
like

8.60 / 10 112 reviews
Admire London’s beautiful skyline while you enjoy a luxury four-course dinner on a panoramic cruise down the Thames.
US$ 101.50
Book