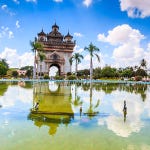 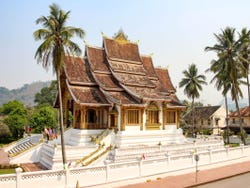 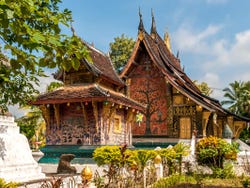 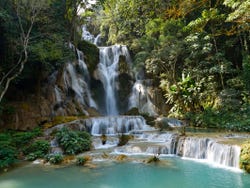 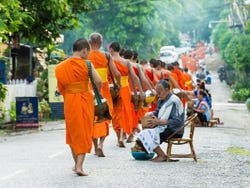 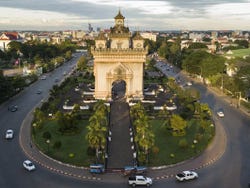 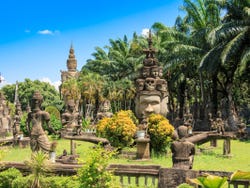 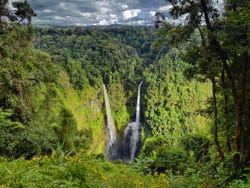 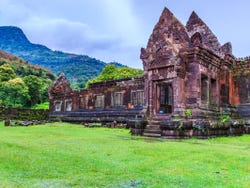 On arrival in Luang Prabang, you'll be met at the International Airport and taken to your hotel, where you'll enjoy a typical local snack to renew energy after your journey before the adventure begins...

Dive right into Laos' legendary cultural heritage on a guided tour of Wat Xieng Thong. This magnificent 16th century Buddhist temple is considered by many to be the most beautiful in all of Laos. As you explore the sanctuary and its grounds, you'll learn about the temple's importance in the history of the city and the country as a whole, as it was the coronation site of the Laotian monarchs up until 1975.

You'll then head to Wat Visounarath, an ancient temple filled with many intricately carved Buddhist statues and steles, before making your way up the more than 200 steps that separate the city from Mount Phou Si.  The climb up the sacred hill will be well worth the effort, as it offers unforgettable views over the city and the surrounding mountains from the peak.

At the end of your first day, you'll be dropped back off at your hotel to relax.

Day 2 of the Laos tour package begins with a hearty breakfast at your hotel, you'll set off to the docks, where you'll board a boat ready to cruise the Mekong River. The twelfth longest river in the world, the Mekong is an extremely important waterway in Asia, crossing through the whole of Laos as well as five other countries.

As you sail past green mountainous landscapes, you'll make stops to explore the Laotian settlements located along the river banks. Your first stop will be Ban Xang Hai, where you'll learn all about the production of the local rice whiskey for which the village is famous.

Your next stop will be at the Buddhist caves of Pak Ou, sacred sanctuaries built into the rock overlooking the Mekong River and full of hundreds of miniature sculptures of Buddha. Finally, you'll visit Ban Xang Khong, a small village where the locals are known for their traditional handcrafting skills, especially of artisan Saa paper, which is made from mulberry trees.

Having spent your day discovering the rural side of Luang Prabang, you'll be dropped off back at your hotel in the city centre.

Begin your third day with an early start to immerse yourself in one of Luang Prabang's most incredible cultural experiences. You'll have the opportunity to observe the Buddhist monks' daily almsgiving, a sacred ceremony that takes place each morning in the city's streets. The saffron-cloaked holy men file past local devotees, collecting their donations of food offerings. It is a truly humbling sight to behold, and gives a unique insight into Laos' religious heritage.

After this unforgettable experience, you'll then be taken to see a new perspective of Laos, delving deep into the country's beautiful nature on a visit to the stunning Kuang Si Falls. The waterfalls, located around 15 miles (25 km) away, cascade over three levels of rock set into a steep hillside and surrounded by verdant jungle. A number of natural pools have formed below the waterfalls, and it is possible to swim and bathe in their striking azure-blue waters.

Finally, you'll visit the nearby village of Ban Na Oun where you'll discover the traditions and culture of the Hmong people, before you return to spend your last night in Luang Prabang.

Spend your final morning in Luang Prabang visiting the Royal Palace on a guided tour. Built in 1904, its architecture reflects both the French colonial area and traditional Laotian style. Learn all about the importance of its history in the city, as the former royal residence and a contemporary national museum. You'll also visit a local market where you'll be able to find handicrafts and other typical products.

Around midday, you'll be taken to the International Airport in the city to catch your flight to Vientiane. On arrival in the Laotian capital, you'll meet up with your English-speaking guide and head to your hotel, after which you'll have free time to get to know the city at your own pace.

Enjoy breakfast in your hotel before setting off for your guided tour of Vientiane. Visit the city's most important temples, including Wat Si Saket, considered to be the oldest standing sanctuary in the capital and Haw Phra Kaew, originally built to house the important Thai statue of the Emerald Buddha, and these days a museum dedicated to Buddhist religious art.

Observe yet more French colonial influence mixed with traditional Laotian art as you near Patuxai, the Arc de Triomphe-style war monument that commemorates those who lost their lives in Laos' fight for independence.

You'll then have the opportunity to visit Vientiane's morning market, before visiting Buddha Park, a green space located around half an hour from the capital. The park, as you may guess from its name, is full of ornate stone Buddhist sculptures, depicting the deity himself as well as representing mythical creatures, humans and demons. A truly fascinating sight!

Following the day's planned activities, you'll head to your hotel to spend the evening as you please.

Get up first thing in the morning to have breakfast at your hotel before being driven to Vientiane's airport, where you'll board a flight to take you to the city of Pakse. As soon as you get there, your guide will meet you and take you out of the hustle and bustle of Pakse and into the surrounding countryside.

Spend your day embracing the nature of this area of southern Laos, visiting Tad Lo, a small village famous for its impressive waterfalls, before reaching the Bolaven Plateau. Here, located between the Mekong River and the Annamite Mountain Range, you'll be left awestruck by the scenic Tad Fane falls, which cascade dramatically from almost 400 feet (120 m) in height.

After a full day, you'll be taken to your hotel in Pakse city centre where you'll spend the night.

Having enjoyed a delicious breakfast in your hotel, you'll begin day seven of your tour making your way through the historic province of Champasak to visit the ruins of Vat Phou. This ancient former Hindu temple complex, built during the Khmer Empire, is a World Heritage Site and a spectacular site whose crumbling stone structures and sculptures contrast beautifully with the bright green jungle around it.

After exploring Vat Phou, you'll make a stop at the Khone Phapheng Falls. The waterfalls, which are followed by a series of rapids, are the largest in Southeast Asia, and are the main reason why the Mekong River cannot be navigated all the way to China. The area is characterised by its 4000-odd islands, of which we'll visit Khong Island, where you'll spend the night at a hotel in a French colonial town.

During your penultimate day, you'll have free time to explore Khong Island at your own pace and admire the surrounding landscapes. About halfway through the day, you'll return to Pakse city centre, where you'll spend the night.

Having eaten breakfast at your hotel, you'll be dropped off at Pakse airport, putting an and to your incredible nine-day Laos tour package.

This nine-day Laos tour package includes 8 nights of accommodation with breakfast at the following hotels:

The price indicated is based on two people sharing a standard double room. We also offer Deluxe rooms: contact us to find out prices and reserve this option.

Flight from Luang Prabang to Vientiane.

Flight from Vientiane to Pakse.

If you cancel 26 days before the day of the activity, we will refund you 50%. If you cancel under this time or do not show up, you will not be refunded.
like

9 / 10 2 reviews
Discover a natural paradise in the heart of Laos. Explore the incredible waterfalls of Kuang Si at your own pace thanks to this shuttle bus service.
US$ 6
Book
like

6.40 / 10 5 reviews
Let yourself be captivated by the beautiful nature of Laos at twilight. Enjoy a sunset cruise on the Mekong River from Luang Prabang.
US$ 20
Book
like

8.70 / 10 3 reviews
Enjoy a full day of adventure in Luang Prabang, with this tour, taking you around the land of the elephants and even riding on one!
US$ 50
Book