Ride a segway through the centre of Nantes and discover the exciting history and all that the capital of the Loire has to offer, a must-see in the west of France!

Ride a segway through the centre of Nantes and discover the exciting history and all that the capital of the Loire has to offer, a must-see in the west of France! 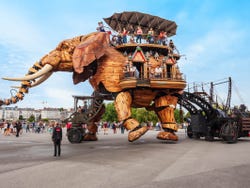 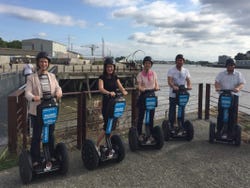 In your reservation you can choose one of the following options. All tours will start and end at rue des Vieilles Douves, next to Place Royal in Nantes.

Tour of the Island's Machines (1 hour)

After a short training session on how to drive the segways, we'll go to the centre of Nantes to admire the architecture of the Place Royal and the Palais de Justice.

We'll continue the segway tour of Nantes on the Île de Nantes, a small floating area on the river Loire where the famous Island Machines are located. Amongst these attractions, the great carousel of the marine worlds, the Titan crane and the Buren rings stand out.

We'll also see the great protagonist of the Machines of the Island. This is the elephant of Nantes: a gigantic mechanical pachyderm that has become a symbol of the city. Before returning to the starting point, we'll see other attractions on the island such as the so-called Hangar à bananes.

Tour of the intramural area (1 hour)

On this segway route we'll go through the old town of Nantes, located in the area that was protected by the old city walls. We'll first pass through the Bouffay and Feydeau districts. In ancient times, the latter was part of an island on the Loire River. Little by little, it gained ground to the river water and is now part of the urban fabric of Nantes, notably the opulent mansions of the 18th century merchants.

The next stop will be at Place Élisa-Mercûur, where we'll see a curious water mirror and see from the outside the famous castle of the Dukes of Brittany.

Finally, we'll pass by the Place Graslin to admire the façade of the Nantes Opera House and return to the starting point.

In this route, we'll combine the best of the two previous itineraries. We'll start the tour by segway going through the areas closest to the Place Royal and the Dukes of Brittany's castle.

The tour will continue next to the Lu Tower, a vestige of the former biscuit factory of that brand. After passing through the water mirror and the Bouffay district, we'll go to the birthplace of the writer Jules Verne. From there, we'll head towards the Feydeau area and the Palace of Justice to continue learning about the local history.

Finally, before returning to the meeting point, we will take a tour of the Île de Nantes to see the famous Island Machines.

Timetable: this tour operates at 5pm.

If you prefer to see the city from a distance, you can book the night tour of Nantes by segway.

From
US$ 35.10
Free cancellation up to 3 days before
Book

No rating yet
Explore the beautiful historic centre with this Nantes E-Scooter Tour. Enjoy a fun and environmentally friendly way to discover the city's wealth of monuments.
US$ 42.20
Book
like

9.60 / 10 122 reviews
Discover the main tourist attractions in Nantes and explore the historical centre with an expert, English speaking guide. Plus, it's free!
Free!
Book
like

No rating yet
Watch as the monuments around Nantes light up with this Nantes Evening Segway Tour through the old town. Enjoy a beautiful route through the Loire capital.
US$ 64.40
Book