Although many cities claim to be "The City of Lights", perhaps none has such a claim to the title as the French capital. Fall in love with its magic on this tour of Paris by night. 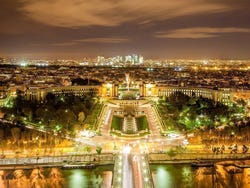 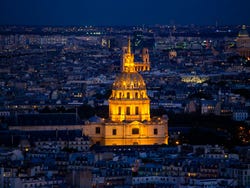 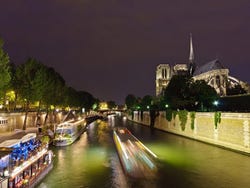 The tour meets in front of the Luxor Obelisk, in Place de la Concorde, to embark on two hours through Paris as it was meant to be seen: illuminated by night.  As stunning as they are during the day, the Eiffel Tower, Arc de Triomphe, Trocadero and the other must-see sites are only more amazing when they are lit up at night.

The Eiffel Tower has 20,000 light bulbs and 336 projectors, using 120 kilowatts of power to highlight the metal latticework by night. You can see it in the distance from the Palace of the National Assembly, where the lights reflect from the water just as they do from the palaces neoclassical columns: and this tour will paint in a different light (literally) all the principal sights of the world's most romantic city.

Taking a picture of the Eiffel Tower at night is technically illegal - if you use it for commercial purposes. European Union copyright law states that an artistic work (a photo, video, song, or indeed, building) is protected during the lifetime of its creator, plus another 70 years. The lights were only installed in the tower in 1985, so it's going to be some years before you can make any money from that snap!

Next to the Luxor Obelisk in Place de la Concorde

Panama is fantastic, it knows a lot about the history of Paris, and although I speak Spanish and a little English, I understood perfectly what I am saying, its accent is very clear Opinion translated. Show original.

9.20 / 10 285 reviews
Immerse yourself in "The City of Lights" with a guided tour around the French Capital, discovering the Louvre, the Siene and Notre Dame. What's more, it's FREE!
Free!
Book
like Free

9 / 10 18 reviews
Take a free tour through the narrow streets of the most cultural and artistic of Paris' districts, where Picasso and Van Gogh sought out inspiration.
Free!
Book
like

8.80 / 10 1,290 reviews
Drifting down the Seine River on a panoramic river boat during the day or at night-time is an unforgettable experience and offers unparalleled views of Paris.
US$ 17.80
Book