Many bottlenose dolphins and pilot whales frequently swim in the waters along Tenerife's Playa de San Juan. Take a close look at these marvellous mammals with this Tenerife Yacht Tour.

Many bottlenose dolphins and pilot whales frequently swim in the waters along Tenerife's Playa de San Juan. Take a close look at these marvellous mammals with this Tenerife Yacht Tour. 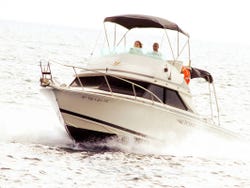 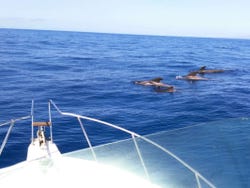 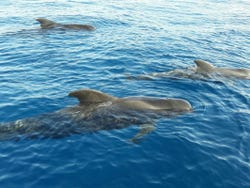 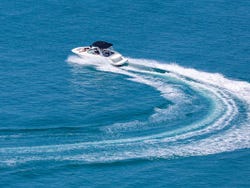 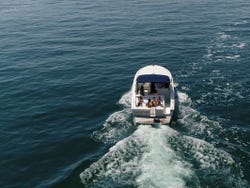 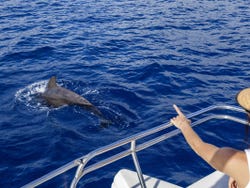 When reserving you can choose a 3 or 4 hour tour. Both routes start and end their journey at the port of the Tenerife town of Playa de San Juan.

Once on board the yacht will sail along the western coast of Tenerife. The sea currents, wind and certain weather conditions in this part of the Atlantic mean that certain species of cetaceans such as bottlenose dolphins or pilot whales, also known as "pilot whales", live in these waters.

While we're sailing we'll have the opportunity, depending on the state of the sea at that time, to observe some of these specimens swimming closeby. We'll stop at the nearby Cala de Agua Dulce, where you'll have free time to go snorkelling - a perfect opportunity to get to know Tenerife's marine fauna! After this break, we'll return to the starting point.

On this longer walk we'll sail parallel to the colossal cliffs of Los Gigantes to try and spot the cetaceans that usually swim in these waters. During the trip, we'll also admire the different volcanic formations that extend along the coast.

We'll make a stop on our route by anchoring at Masca beach. You'll have some free time in this cove to enjoy a refreshing swim, sunbathe or try out snorkelling - don't forget your fins and snorkels! From here, the tour will take us back to the port of Playa de San Juan.

Cetaceans are unpredictable animals. Many different factors beyond the control of humans, such as ocean currents, wind direction or weather conditions, depend on seeing a greater or lesser number of pilot whales, bottlenose dolphins and other marine species.

3 or 4 hour trip, depending on the duration chosen, on board a yacht.

From
US$ 67.90
Free cancellation up to 24 hours before the service starts
Book

It was a wonderful experience, Carol and the captain are very friendly and have a good communication they make everything better specially the captain that gave us more time for enjoying and taking pictures. And the wales were incredible! I will recommend it 1000%

Very good experience, we have been able to see many cetaceans, Javier very friendly and committed to see how many more the better, the pecking very well, very good experience Opinion translated. Show original.

If we say something about our trip to Tenerife, it will undoubtedly be the memory of the incredible experience we have had with this activity. The excursion on Javi's yacht was amazing. Javi is an expert and has given everything so that we could see a lot of whales, dolphins, turtles, ... Also the stop at Masca cove is very beautiful and at that moment Javi has prepared us some incredible sandwich with Canarian products , fruit and drinks of all kinds. Thanks to Javi and Carol Opinion translated. Show original.

10 / 10 1 review
Indulge in the rich culinary culture of the Canary Islands on this irresistible food and wine tasting tour of Tenerife's guachinches, traditional local taverns.
US$ 130.20
Book
like

9 / 10 66 reviews
Visit the highest peak in Spain and admire the volcano with this Teide Cable Car + Hike Experience. Enjoy incredible views and an unforgettable hiking route.
US$ 92.30
Book