On this tour, you'll discover the legacy of Rio 2016 in the Olympic Boulevard and the famous scientific exhibition of the Museum of Tomorrow, the most visited in Brazil.

On this tour, you'll discover the legacy of Rio 2016 in the Olympic Boulevard and the famous scientific exhibition of the Museum of Tomorrow, the most visited in Brazil. 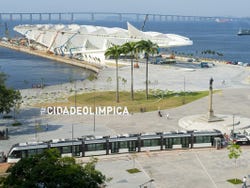 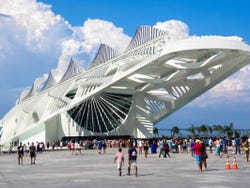 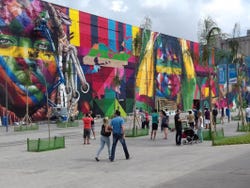 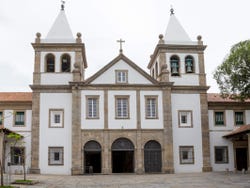 After picking you up at your hotel in Rio de Janeiro we'll go to the Valongo Wharf area on a minibus. Did you know that between 1850 and 1920, the area became known as 'Little Africa' because it was occupied by emancipated slaves from many different nations? This cultural melting pot is expressed on the nearby Etnias Mural, created by the artist Eduardo Kobra to reflect the multiculturalism in the country. It is the largest graffiti mural in the world measuring 560 feet and even holds a Guinness World Record.

We'll continue with the tour towards Mauá Square and the Olympic Boulevard, where we'll discover intriguing facts about the legacy of the 2016 Rio Olympic Games. On the same boulevard, there is a modern building designed by the Spanish architect Santiago Calatrava: the Museum of Tomorrow. To learn all about some of the surprising theories about our planet and solar system we'll visit the permanent exhibition.

Close to the Museum of Tomorrow is the San Benito Monastery. Inside we'll admire the different Mannerist style works of art, which will allow us to understand Rio's colonial heritage. The history is further reflected at the next stop: 15th November Square. Did you know that this day is special for Brasilians as it was the day the Republic was declared?

Finally, we'll go to one of the most renowned coffee shops in Rio, the legendary Confeitaria Colombo. This establishment (closed on Sundays) stands out for its Art Nouveau decoration. After admiring the interior design of the premises, we'll head back to your hotel in Rio de Janeiro.

The tour includes pick up, at the times indicated, in the following tourist areas of Rio de Janeiro:

When you book you must indicate which of the two areas mentioned you would like to be picked up from. Independent from the option chosen, after the pick ups at the different hotels the tour will start at 9 am.

Tour with pick up in southern area

Tour with pick up in western area

Pick up and drop off at hotel in selected area.

From
US$ 32.30
Free cancellation up to 24 hours before the service starts
Book

We were happy with the guide Liz since she knew how to explain very well all the details where we were going. The guide is very happy, the tour was pleasant and also the guide has a gift of people, excellent service! Opinion translated. Show original.

No rating yet
The Maracana is one of the most famous stadiums in the world. Explore a mythical sporting venue, and the heart of samba on this fantastic double tour.
US$ 53.80
Book
like

9.40 / 10 110 reviews
Witness the other face of Rio de Janeiro with this guided walking tour of the Rocinha favela in which you will discover the least known and most surprising corners of the favelas.
US$ 23.30
Book
like

10 / 10 1 review
Enjoy a day sailing Brazilian waters in the most exclusive way with this Rio de Janeiro Private Boat Tour just for you and your partner, family or friends. An unforgettable experience!
US$ 246.10 per group
Book