Explore the iconic landmarks of Rosario in a fun way with this fantastic bicycle tour. You can choose a route through the historical center, to the elegant squares, or along the banks of the Parana river. 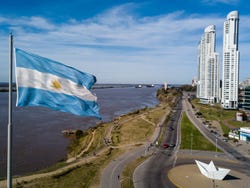 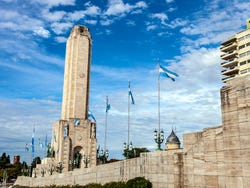 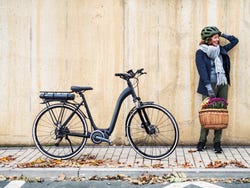 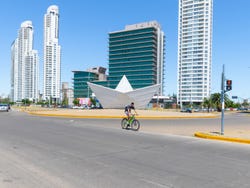 When booking your bike tour of Rosario you can choose one of the following routes. All of them depart at the time you prefer from the picturesque San Martín Square, and all routes will also end at this central square.

Tour of the coastal area (2 hours)

On this bike tour, we will ride along the Rosario waterfront, located on the banks of the beautiful Paraná River. During the tour, we will also see the Rosario-Victoria bridge: the great river footbridge that connects the Argentinean provinces of Santa Fe and Entre Rios.

We will also stop in front of the National Historical Monument to the Flag, which was inaugurated in 1957 in homage to Manuel Belgrano. After telling you about its history, we will continue the bicycle tour around Rosario in the Pichincha neighborhood, one of the most fashionable areas in the city.

This bicycle route will allow us to discover the most emblematic esplanades of Rosario. We will first visit San Martín Square, dedicated to one of the main protagonists of the Argentine War of Independence.

Our tour continues in the charming General López Square where you will learn all about its connection with the South American War of the Triple Alliance. The next stop will be at Ernesto "Che" Guevara Square, where we will reveal some curiosities about the life of Che, who was born in Rosario in 1928.

Before returning to the original starting point, we will also pass other iconic places in Rosario such as the magnificent National Flag Monument, the idyllic Oroño Boulevard, and the enchanting Pichincha neighborhood.

Tour of the historical center and coast (3.5-4 hours)

We will start this route by bicycle through Rosario by heading towards the Paraná river bank. There, we will stop in front of the National Monument to the Flag where we appreciate the works of the Tucumán sculptor Lola Mora.

Following the Paraná river bank, we will arrive at Urquiza street, where we make a stop to contemplate the façade of the Rosario Municipality, located in the old customs building. We then head to the elegant Utopia fountain, where we will explain the fascinating legend behind it.

Then we will go to the area of Puerto Norte, where you can have your photo taken in front of the famous sculpture of the paper boat. Finally, we will stop in front of the aquarium of the Paraná River to explain its main species.

Tour of the coastal area

Tour of the historic centre and waterfront

The activity takes place with a guide that simultaneously speaks in english and spanish.

Bookings are permitted up until 24 hours before the activity as long as there are still places. Book as soon as possible to guarantee availability.

from
US$ 12.50
No hidden fees or surcharges
Free cancellation up to 24 hours before the service starts
Book

Plaza San Martín square, at the intersection of Santa Fe and Dorrego streets.

No rating yet
Enjoy a wonderful experience in Rosario with this fantastic boat ride on the Paraná River.
US$ 28
Book
like

No rating yet
Ride along the idyllic banks of Rosario with this fantastic speedboat trip on the Paraná River.
US$ 55
Book
like

No rating yet
Watch a fantastic Argentine Superliga match in Rosario with these tickets. You will see one of the city's two top teams in action.
US$ 67
Book