Lively streets, vibrant colours and traditional Mexican cantinas are calling your name! Escape from San Diego for the afternoon on this tour to Tijuana, the largest city in Baja California.

Lively streets, vibrant colours and traditional Mexican cantinas are calling your name! Escape from San Diego for the afternoon on this tour to Tijuana, the largest city in Baja California. 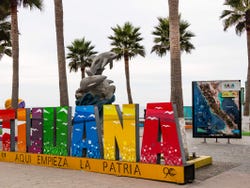 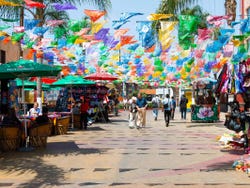 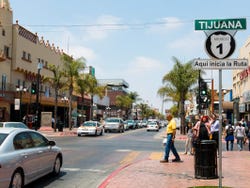 Having met your guide at the Santa Fe Train Station, you'll leave San Diego behind for the afternoon. After just half an hour, you'll have reached the United States' border and crossed into Mexico, heading south in the direction of Tijuana.

Welcome to the largest city on the Baja California Peninsula! Arriving in Tijuana, you'll be immersed in the local culture and lively atmosphere as you begin exploring the main street. Along the route, you'll notice that a number of roundabouts are crowned with statues of important historical figures such as Abraham Lincoln.

Your tour will take you to the iconic Tijuana Cultural Centre, which welcomes a million visitors each year and has become one of the city's main tourist attractions, before visiting the emblematic Water Tower, built as a casino as part of the historic Aguas Calientes entertainment centre.

After visiting the old horse racing track, you'll head to Avenida Revolución, Tijuana's tourism hub. Stroll between typical Mexican cantinas, clubs and art galleries, before entering La Placita, a local restaurant where you'll have the opportunity to make your own taco. Mix deliciously spiced meat or vegetables with guacamole, salsa and onion in a tortilla before indulging in the typical delicacy!

Leaving Tijuana behind, you'll cross back over the Mexican border, arriving back at the original meeting point in San Diego for 7 pm.

If you'd like to see more of Mexico and have a full day to spare during your trip to San Diego, check out our Baja California Day Trip, which will take you on a tour of Tijuana, Puerto Nuevo and Rosarito.

This excursion crosses the border between the United States of America and Mexico, therefore it is obligatory that you bring your valid passport on the day.

No rating yet
Visit one of the most iconic ships in the United States with our USS Midway Museum Ticket & Audioguide in San Diego. You'll explore the ship and discover the secrets of this aircraft carrier.
US$ 26
Book
like

No rating yet
Idyllic beaches, historic architecture and picturesque Coronado Island: discover the best of San Diego, nicknamed "America's Finest City", on this guided tour.
US$ 50
Book
like

No rating yet
Explore Venice Beach, spot the stars in Beverly Hills and embrace the glamour of Hollywood: leave San Diego behind and discover the magic of Los Angeles!
US$ 169
Book