The indigenous ceremonial centres of Tibes and Caguana are essential aspects of the Taino culture of Puerto Rico. Immerse yourself in its exciting pre-Columbian history! 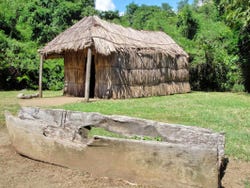 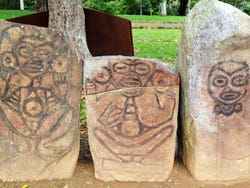 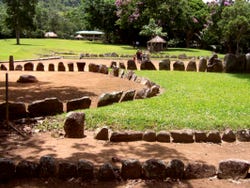 The island of Puerto Rico still preserves important remains of the Taino Indians who inhabited this area of the Caribbean during the pre-Columbian era. Would you like to find out about the exciting legacy of this historic period? We'll pick you up at 8:30 am from your hotel in San Juan in a 4x4.

An hour and a half later we'll arrive in Ponce, a city in the south of Puerto Rico where we'll be visiting one of the most outstanding archaeological sites on the island: the Tibes Indigenous Ceremonial Center. We'll see the remains of the ball courts where the game "batú" was played, one of the most popular sports in Mesoamerica during the pre-Hispanic period. Do you know how to play?

During the 90-minute visit to the Tibes archaeological center, we'll also learn about the history of the oldest astronomical observatory in the Antilles which is also located there. At the end of the tour, we'll head north towards Utuado, where we'll stop so you can get something to eat.

After lunch, we'll head to the Caguana Ceremonial Ball Courts Site. At this archaeological site, we'll get the chance to see huge carved stones, as well as the old courts where the popular ball game was played. At the end of the visit to Caguana, we'll make our way back to San Juan, arriving by 5 pm.

Pick up from Ponce

You can also go on the same trip with departure from Ponce.

Entry to all places visited.

You can book up until the previous day (8:30 AM local time) if there are still places available.

9.50 / 10 240 reviews
Explore San Juan and get to know the history of the San Cristóbal Fort, the Las Palmas Bastion, the Totem or El Morro. The best part? It's FREE!
Free!
Book
like

8.80 / 10 15 reviews
Climb on board a catamaran to visit Culbrea Island, a beautiful island to the East of Puerto Rico. What's more, you can snorkel and enjoy the marine backdrop of the Caribbean sea.
US$ 130
Book
like

No rating yet
The Las Delicias waterfall and the petroglyphs of the Zama mural are popular attractions in Puerto Rico. Discover them on this trip from San Juan!
US$ 350 per group
Book