Ziplines, sleds, and giant snow tubes are just a few of the fantastic activities waiting for you at Farellones Park. Enjoy a fun-packed day at when you take our fantastic trip from Santiago. 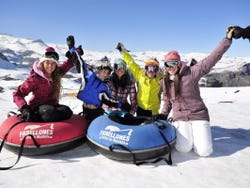 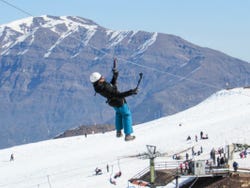 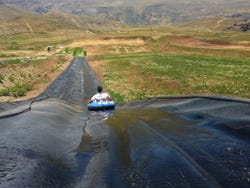 At the scheduled time, we will pick you up from your hotel in Santiago de Chile before heading to the beautiful Farellones Park, nestled in the spectacular mountains surrounding the city.

During the winter season, we will make a brief stop en route so that you can rent thermal clothing and enjoy the activities with total comfort. If you intend to do some skiing or snowboarding, you can also rent the necessary equipment here.

Fully equipped, we'll get back on the bus and continue the journey to Farellones, the only snow park in the Santiago region.

Farellones Park is a special place where both adults and children will have a fantastic time. You will enjoy staggering views of the Andes landscapes from the panoramic chair, zoom over the slopes on the zip wires, slide through the snow (or water in the summer) in giant tubes, or mount a Fatbike and take a thrilling two-wheeled tour.

After a day of fun, we return to the bus and head back to Santiago de Chile, where we drop you off at your hotel so you can take a well-earned rest.

Farellones Park changes from season to season and so too does its activities.

From 15 June to 31 August, Farellones Park becomes a winter playground covered in a thick blanket of snow.

If you go to the park during this period, you can enjoy a multitude of snow-based activities. You can hit the slopes on giant tubes, sleds, or if you have the equipment, skis, and snowboards.

From the 23rd of September to the 20th of March, you will find a completely different landscape, extensive green meadows, prepared exclusively for your enjoyment.

Just as the park takes on a new appearance in the summer months, the activities also change. The giant floats now whizz down hair-raising water slides instead of snowy slopes. There are also many other fantastic summer activities, such as the climbing wall, mountain carts or bike tracks where you can test your skills.

The timetable of the tour varies depending on the season of the year:

* The price increases on the 20 March

You can book up until the previous day (7:00 AM local time) if there are still places available.

US$ 24.70
No hidden fees or surcharges
Free cancellation up to 24 hours before the service starts
Book

Free! Free cancellation up to 24 hours before the activity starts. If you cancel under this time or do not show up, you will not be refunded.
When the minimum number of participants (2) is not reached, we will contact you to offer you other alternatives.
like

8.50 / 10 62 reviews
Surround yourself with the natural beauty of the Andes on this day trip to picturesque Cajón del Maipo and the El Yeso Valley.
US$ 37
Book
like -13%

9.50 / 10 19 reviews
Cross the border into Argentina on this trip to Aconcagua Park. You'll discover the highest mountain in the Americas and the Laguna del Inca.
US$ 105
Book