The fascinating medieval city of Shiraz is full of history and charming hidden corners. Discover all its treasures, such as the mosque and ancient tombs, when you take our unmissable English language guided tour.

The fascinating medieval city of Shiraz is full of history and charming hidden corners. Discover all its treasures, such as the mosque and ancient tombs, when you take our unmissable English language guided tour. 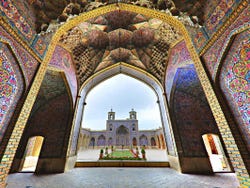 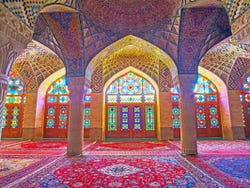 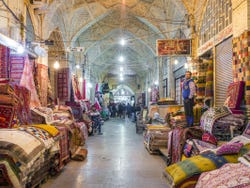 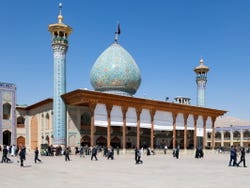 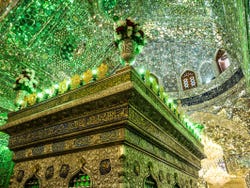 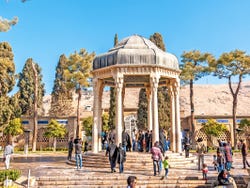 Nicknamed the city of poets and literature, Shiraz was the ancient capital of the Zand dynasty in the 18th century. It is considered to be one of the most beautiful cities in Iran and the temples, parks, and well-preserved monuments will amaze you

After collecting you from your hotel in Shiraz, we will begin our trip by heading to Kahn Karim Castle, a medieval fortress situated in the center of the city. We will explore the magnificent citadel and learn all about how it was constructed by the best architects and artists of the era as a response to the elegant palaces of Isfahan.

Our next stop is the principal attraction in the city, Nasir-ol-molk, also known as the Pink Mosque. We will admire the detailed architecture of its facade, but we recommend you step inside to see how the sun shines through the colored glass windows and is magically cast onto the floor of Persian rugs.

Our tour continues at Vakil Bazaar, the largest and busiest market in the city. Colorful rugs, exotic spices, and Persian products fill the stalls here and demand your attention as you browse the aisles.

Leaving the bazaar behind, we then head to Shah-e-Cheragh, one of the most important pilgrim sites in Iran and where the remains of the Safavid philosopher and theologian Sayyed Ahmad Alavi are laid to rest. The temple's stunning interior is covered in a huge mosaic of colored glass.

Our last stop on the guided trip in Shiraz is the tomb of the poet Hafez, one of the city's most important figures. The tomb is on the same grand scale as those usually reserved for leaders and royalty. This staggering 14th-century tomb includes everything from ponds, a marble coffin, and a pavilion held up on eight elegant columns.

Finally, we return to your hotel in Shiraz at around 4:30 pm.

No rating yet
Discover two beautiful Persian palaces when you take our fantastic guided trip to Firuzabad to explore the palaces of Qal-e Dokhtar and Ardashir.
US$ 140.20
Book
like

No rating yet
Immense palaces, monumental gateways, and statues of mythical creatures are some of the things you will discover on our unforgettable tour of Persepolis.
US$ 106.50
Book
like

No rating yet
The Margoon Waterfall is one of the most famous waterfalls in Iran. Get lost in its landscapes on this trip from Shiraz.
US$ 336.50 per group
Book