Historic temples, floating villages and lush natural landscapes: discover the charms of Cambodia on this five-day tour from Siem Reap to Phnom Penh. 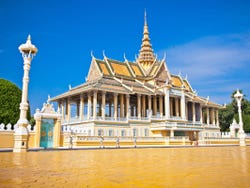 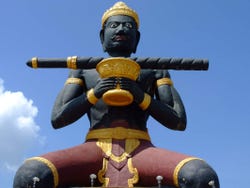 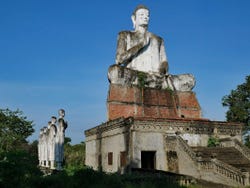 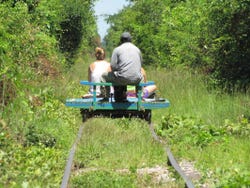 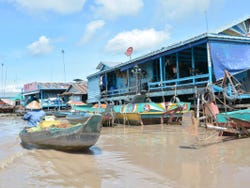 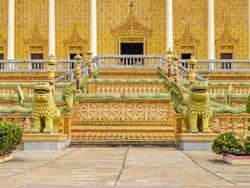 At 7:30 am on the first day of the tour, we'll pick you up from your hotel in Siem Reap and set off towards the west. After a three hour drive, we'll reach the historic temple of Wat Ek Phnom. We'll learn all about the 11th century Angkorian Hindu sanctuary that was later converted to Buddhism while we admire its enormous statue of Buddha.

Wat Ek Phnom Temple is located just 20 minutes from the famous city of Battambang, which will be our next stop. We'll embark on a panoramic tour of the historic town, learning all about its legendary past as we take in the views of its pagodas, French colonial houses and the emblematic statue of Ta Dumbong. Following our guided tour, we'll leave our luggage at the hotel in Battambang and head to a local restaurant for a well-earned lunch of typical Cambodian delicacies.

After lunch, a unique experience awaits us: a half-hour ride on the famous norry, or Battambang bamboo train! We'll then go to Phnom Sampov mountain, where we'll visit the bat caves for which the area is known. In the late afternoon, we'll return to the hotel in Battambang where you can get dinner and relax ready for the next day's adventure.

Full of energy after a hearty breakfast at the hotel, we'll leave Battambang behind and set off to the ruins of Wat Bakan. For over 800 years, this shrine was one of the most venerated places in Cambodian Buddhism, until its peace was disturbed by the Khmer Rouge in the 20th century. We'll learn about the tragic events that happened in this area, before continuing on our tour to nearby Pursat.

Arriving in Pursat, we'll have lunch at the Central Market, discovering the best local specialities on offer at its food stalls, before paying a visit to the floating village of Kompong Luong. There, we'll enjoy a cruise along its "river avenues" in a traditional boat. At the end of the day, we'll head back to Pursat, where we'll spend the night.

After breakfast in Pursat, we'll set off to the next Cambodian city on our tour: Udong. We'll make our first stop at a restaurant in the city centre for lunch, before visiting Phnom Udong, or "Temple Hill", home to the Buddhist temple of Arthaross. Having enjoyed a guided tour of the archaeological site and revealing its many mysteries, we'll leave Udong behind and head to the Cambodian capital. We'll stay in a hotel in Phnom Penh old town.

On day four we'll enjoy a guided tour of Phnom Penh: after breakfast at the hotel, we'll head to the Royal Palace. There we'll visit the Throne Room, the Silver Pagoda and the Khemarin Palace and admire their typical Khmer architecture. We'll then make our way to the National Museum of Cambodia, where we'll explore the different exhibitions that make up the permanent collection, home to many archaeological pieces, works of art and ancient everyday objects. As a finishing touch, our tour will come to an end at a restaurant in the city centre where we'll indulge in a delicious Cambodian lunch.

In the afternoon, we'll leave the hustle and bustle of Phnom Penh behind and make the journey to the nearby Koh Dach, or Silk Island, by boat. We'll soon discover why it earned its name when we learn all about the mulberry tree worms and how they weave delicate fabrics with their silk. At the end of our visit, we'll return by boat to Phnom Penh, before a minibus ride back to the hotel.

After our last breakfast together, we'll go to the Tuol Sleng Genocide Museum, a sobering visit that is essential in learning about the Khmer Rouge in Cambodia. We'll learn all about the country's history as we visit the Choeung Ek Memorial, which honours the victims of the violent regime.

We'll then have lunch at a local restaurant, before spending the afternoon exploring more of Phnom Penh's fascinating monuments. Feel a sense of peace and tranquillity visiting Wat Ounalom Monastery and admire the enormous Wat Phnom, the highest Buddhist sanctuary in the city. The last stop of our tour will be at the popular Phsar Toul Tum Poung, or Phnom Penh Russian Market, where you'll have the chance to buy souvenirs.

Finally, we'll head back to the hotel so you can collect your luggage, and our five day tour of the best of Cambodia will come to an end. If you wish to spend more time in Phnom Penh or require an airport transfer, this will be at your own expense.

This five-day tour of Cambodia includes four nights' accommodation with breakfast at the following four star hotels. The price is based on two people sharing a double room:

Entrance fees to the different monuments and temples visited in this itinerary are not included in the price of the tour. The total amount per person of these tickets is around US$ 30.

Hotel pick up in Siem Reap.

Transport by vehicle with WiFi and bottles of water: off road jeep or minibus depending on group size.

All tours as mentioned in itinerary.

No, not suitable for people with reduced mobility or pushchairs/strollers.

US$ 726
No hidden fees or surcharges
Book

9.70 / 10 7 reviews
Visit one of Cambodia's largest ancient temple complexes. Uncover the hidden secrets of the shrines as you explore the jungle around Koh Ker and Beng Mealea.
US$ 40
Book
like

10 / 10 3 reviews
Let yourself be captivated by the legendary history and magnificent architecture of Banteay Srei, Preah Khan and other ancient Angkor Temples.
US$ 15
Book
like

No rating yet
Let yourself be enchanted by an unforgettable evening of Cambodian folklore, dance and tradition at the incredible Rosana Broadway Cabaret Show in Siem Reap.
US$ 55
Book