On this tour, you'll discover the Namib desert's impressive lunar landscape, as well as the strange ancient plants that grow in Welwitschia. 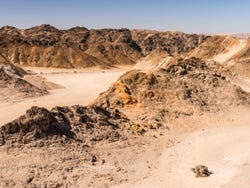 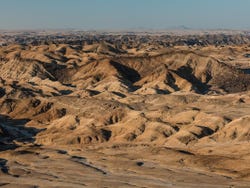 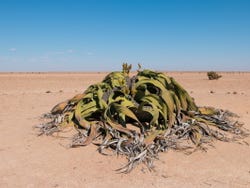 We'll pick you up from your hotel in a 4x4 jeep and start the Namib Desert Tour, leaving the city of Swakopmund behind to head to the Swakop River Canyon; also known as Moon Valley.

The area owes its name to the erosion around the Swakop River 500 million years ago. Here you'll feel like you're observing the craters of the moon's surface in an area that contrasts completely with the bustling city.

After admiring these remarkable rock formations, and even taking a few photos, we'll get back in the car and go to Goanikontes Oasis. We'll stop to eat while we're surrounded by peace and tranquillity at this beautiful resort, which was an old farm built in 1848 and later transformed into a hotel.

Next, we'll go to Welwitschia which is home to the Welwitschia Mirabilis. The plant, which is native to Namibia and Angola, was named after the botanist Friedrich Welwitschia, who discovered it in 1859. It can live for up to 1000 years and is perfectly adapted to the extreme conditions of the desert.

During the tour, you'll have the opportunity to try traditional food, including typical Namibian dishes such as fat cookies (fried dough), oshifima (porridge with white beans and spinach, and sometimes meat), or mopane worms (fried caterpillar).

Once we've eaten and taken a moment to enjoy the remarkable views, we'll head back to the city of Swakopmund and drop you off at your hotel.

Food and drink at Goanikontes Oasis.

You can book up to 20 days before (Swakopmund local time) if there are still places available.

US$ 173.70
No hidden fees or surcharges
Free cancellation up to 48 hours before the service starts
Book

Free! Free cancellation up to 48 hours before the activity starts. If you cancel under this time or do not show up, you will not be refunded.
When the minimum number of participants (4) is not reached, we will contact you to offer you other alternatives.

Sandboarding in the Namib

No rating yet
Let your adrenaline go wild as you sandboard in the Naimb desert at speeds of up to 50 mph! A must for thrill-seekers!
US$ 86.80
Book

No rating yet
On this guided tour around Mondesa you'll be able to get lost in African culture and find out about the impact the apartheid had on this area of Swakopmund.
US$ 95.50
Book

No rating yet
Swakopmund is home to one of the most picturesque coastal towns in Namibia. Discover its history and German colonial architecture on this guided tour.
US$ 95.50
Book