Embark on a private 8-day tour of Morocco and discover its most beautiful cities and landscapes: Fez, Chefchaouen, Marrakech and Merzouga Desert, among others. 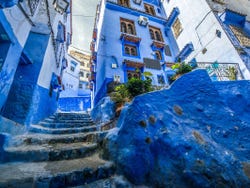 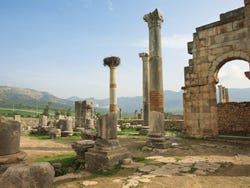 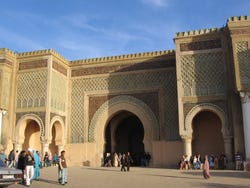 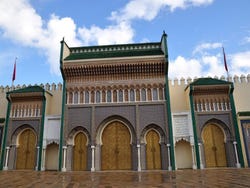 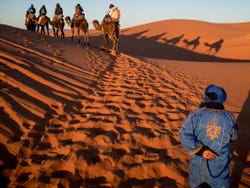 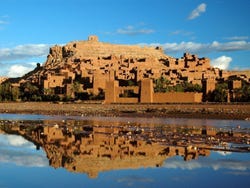 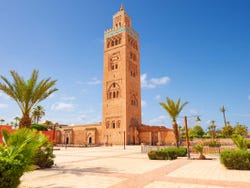 After your chauffeur collects you from the airport or the Port of Tangier, you will head to Chefchaouen, Morocco’s “Blue City”. Perched on the Rif Mountains, its blue-washed houses make it one of the prettiest towns in the country.

The first day concludes after visiting Chefchaouen’s historic center and being led to your hotel or riad.

After breakfast, travel to the stunning archaeological site of Volubilis, listed a World Heritage Site by UNESCO. Next, visit Meknes, one of the four Imperial Cities, with a bustling medina and countless landmarks to see.

In the evening, you will be driven to Fez, where you will spend the night.

In the morning, greet a local English-speaking guide and embark on a walking tour of the Old Town of Fez. Wander through the winding streets of Fez el-Bali, the city’s old medina and learn about the fascinating history of this ancient city while you admire its most important landmarks such as, the Karaouine Mosque and the Mulay Idris Mausoleum.

In the afternoon, you will be driven to your hotel.

Hit the road first thing in the morning and traverse the beautiful cedar woods in central Morocco, home to the barbary apes. Before getting to the little village of Midelt, you will drive through various pretty Berber settlements.

Upon arrival at your first destination, learn about the Berber tribes, before delving into the Merzouga Desert by camelback and spending the night in a traditional desert camp.

After admiring an unforgettable sunrise over the endless fields of sandy dunes, head to the spectacular Todgha Gorge, which are huge limestone walls in the eastern part of the High Atlas Mountains.

Complete the day tour in Ouarzazate, where you will spend the night. Knicknamed “The Door of the Desert”, this town is famous for having been set in numerous films.

Depart early from Ouarzazate and discover other charming towns in the interior of Morocco, like Ait-Ben-Haddou. Explore this red mud brick city and its rich history before heading to Marrakech.

After enjoying a tasty breakfast, set off on a guided walking tour of the medina of Marrakech. Accompanied by an expert English-speaking guide, you will discover the Bahia Palace, the Saadian Tombs and other highlights like Jemaa el-Fnaa Square and the Koutoubia Mosque.

After a fun-filled day exploring Marrakech, you will spend the night here.

On the last day of the tour, you will be dropped off at the airport after enjoying a filling breakfast at your hotel.

You will stay in the following hotels during your 8-day tour:

The tour includes a multilingual escort that speaks English.

Pick up service from the Tangier port or airport.

Private and exclusive tour for you, your family and friends.

Transportation by air conditioned minibus or all terrain vehicle.

Accommodation in Chefchaouen with breakfast.

One night accommodation in Merzouga with dinner and breakfast.

One night accommodation in Ouarzazate with dinner and breakfast.

Dinners in Chaouen, Fez and Marrakech.

Admission tickets to the various museums and monuments.

You can book up to 2 days before (Tangier local time) if there are still places available.

Per group from
US$ 1,955.80
No hidden fees or surcharges
Free cancellation up to 7 days before
Book

8.70 / 10 49 reviews
See the best of Tangier in comfort on a tourist sightseeing bus and hop on and off to explore the Moroccan city's major sites as many times as you'd like.
US$ 14.30
Book
like

10 / 10 1 review
Discover the incredible fusion of tastes that make up the cuisine of northern Morocco on this food tour of Tangier. What are you waiting for?
US$ 49.40
Book
like

8.20 / 10 12 reviews
Immerse yourself in Morrocan culture and history on this private guided tour of Tangier's most emblematic places of interest.
US$ 164.80 per group
Book