Visit Mount Teide, one of the most impressive volcanoes in the world, and discover the mesmerizing natural beauty and urban landscape of Puerto de la Cruz on this full-day tour. 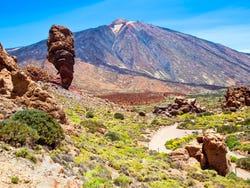 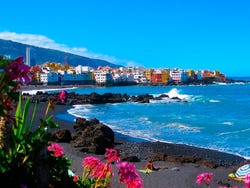 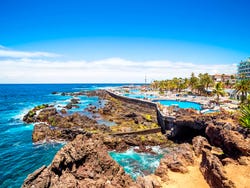 Begin your tour bright and early, and sit back on a comfortable air-conditioned bus to enjoy the striking landscape of Tenerife as you are driven to the interior of the island. Cross the picturesque village of Vilaflor on your way to Teide National Park, an unmissable attraction in Tenerife.

Upon arrival, hop off the bus and set off on a walking tour at the feet of Mount Teide, the highest peak in Spain. The lava has created surprising formations, like the Roques de García, enormous rock structures that seem to defy gravity. On this tour you will visit one of the most famous, the Roque Cinchado. It has become an iconic symbol of Tenerife and Spain, having been printed on one of the Spanish peseta banknotes.

After exploring the Teide, hop back on the bus and set off to Puerto de la Cruz, traversing the Valle de La Orotava, covered in flowers. Puerto de la Cruz is home to several landmarks built by the acclaimed Canarian architect, César Manrique. One of his most well-known projects is Playa Jardín (Jardín Beach). You will have time to have lunch at your own leisure at any of the port’s numerous restaurants. You can also discover other of Manrique’s constructions at your own pace for example, Lagos Martiánez, a beautiful complex of seawater pools and an open-air museum.

In the evening, you will head back to your hotel.

US$ 31.30
No hidden fees or surcharges
Free cancellation up to 3 days before
Book

These are genuine reviews written by our customers.
8
8 6 reviews

8.50 / 10 328 reviews
The laurel forests of the Garajonay National Park, in La Gomera, is one of the most impressive natural reserves in all the Canary Islands. Discover this majestic island on a 10-ho
US$ 73.40
Book
like

9.30 / 10 3 reviews
Wine lovers are in for a treat on this tour of Tenerife's vineyards. Discover the Canary Island's vinicultural traditions and indulge in the best local tastes.
US$ 81
Book
like

8.10 / 10 22 reviews
Discover Tenerife’s spell-binding landscape by visiting the cliffs of Los Gigantes, as well as the islands’s picturesque towns like Icod, La Orotava or Candelaria.
US$ 31.30
Book