Immerse yourself in the historic and cultural legacy of the Roman Empire in Tunisia and explore millennia-old monuments on this guided tour of the ancient towns of Dougga and Bulla Regia. 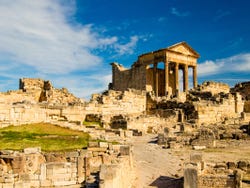 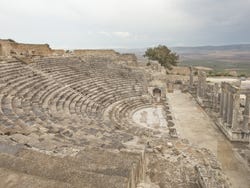 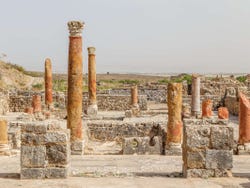 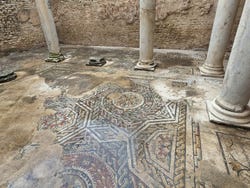 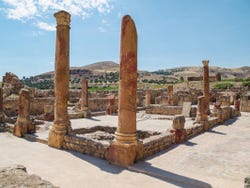 Having been picked up from your hotel in Tunis at 8 am, you'll board a comfortable air-conditioned vehicle and begin your excursion to the archaeological sites of Dougga and Bulla Regia.

After around a two hour drive through Tunisia, you'll reach the first stop on your itinerary: Bulla Regia, one of the country's most important Roman archaeological sites. You'll embark on a guided tour of this important historic site, during which you'll learn all about the origins and history of the ancient Punic, Berber and Roman settlement​ as you discover some of its best-preserved ruins, which include incredible colourful mosaic floors.

Next, you'll make your way to Dougga, located a little over an hour away. On reaching the historic town, the first thing you'll do is enjoy a well-earned break with a delicious lunch at a traditional restaurant to build your energy for the rest of your tour.

With happy tastebuds and full stomachs, you'll continue on your route visiting Dougga's Roman theatre, constructed in the 2nd century CE. Did you know that this enormous venue could seat more than a third of the town's population when it was built?

Follow your English-speaking guide around the ruins of Dougga, which has been called the best-preserved Roman town in North Africa, admiring the Square of the Rose of the Winds, the market, the capitol temple, the forum and the baths. The excellent condition of the structures and the fascinating explanations of your guide will transport you straight back to Tunisia under the Roman Empire.

At the end of a full day of sightseeing, you'll begin your return journey to Tunis, where you'll be dropped back off at your hotel at around 4 pm.

You can book up until the previous day (8:00 AM local time) if there are still places available.

US$ 105.80
No hidden fees or surcharges
Free cancellation up to 24 hours before the service starts
Book

These are genuine reviews written by our customers.
10
10 8 reviews

I had an awesome day out at Bella Regia and Dougga! The guide was super knowledgeable and the driver was great. Amazing sites and a day is the right amount of time to explore these incredible locations. Highly recommend!

This tour was great! The opportunity to visit these Roman historical sites with such a great driver and a knowledgeable guide was priceless. Our guide spoke great English, was totally flexible all day with our wishes and very smart on the history of these 2 important archaeological sites! Highly recommend this tour!!

9.80 / 10 16 reviews
Explore northeast Tunisia and immerse yourself in its past at the Bardo Museum and the Archaeological Sites of Carthage.
US$ 205.20 per group
Book
like

8 / 10 3 reviews
Did you know that Tunisia is home to one of the largest Roman amphitheatres in the world? Discover it on this guided tour of historic Monastir and El Jem.
US$ 110.10
Book
like

No rating yet
Zaghouan Aqueduct and the Roman Water Temple are two must-see sites in understanding Tunisia's legendary history. Discover them with an English-speaking guide.
US$ 104.70
Book