Did you know that Tunisia is home to one of the largest Roman amphitheatres in the world? Discover it on this guided tour of the fascinating historic towns of Monastir and El Jem. 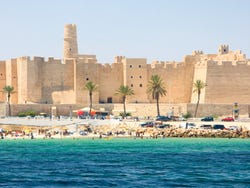 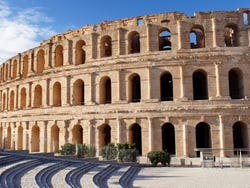 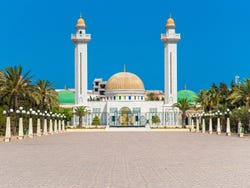 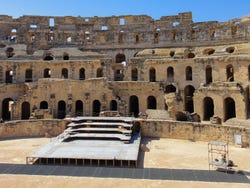 At 8 am on the day of your tour, your guide will pick you up from your hotel in Tunis, and you'll set off on the three hour drive to your first stop: the archaeological site of El Jem, or El Djem, home to some of the most impressive Roman remains in Africa.

Having reached the ancient town, the first place to capture your attention will be the Amphitheatre of El Jem, one of the best preserved Roman stone ruins in the world, and the third biggest amphitheatre after the Coliseum in Rome and the Verona Arena.

After exploring the ancient venue, which had the capacity for more than thirty thousand people, you'll delve into more of El Djem's archaeological sites as you learn all about the town's history and pre-Roman origins as a Carthaginian settlement. At around 1 pm, you'll be treated to a delicious typical lunch, before hopping back on board your tour vehicle and making the journey to Monastir, located a little over an hour away.

Arriving in the coastal city of Monastir, you'll begin your tour of the centre, visiting the Mausoleum of Habib Bourguiba, the final resting place of the first President of the Republic of Tunisia. Continue your tour discovering the Ribat of Monastir, an immense historic fortress built in the 8th century. From its vantage point, you'll have spectacular views over the Mediterranean, and you'll understand how the seas were controlled from the fort. The majestic Ribat has also served as a filming location for movies like Monty Python's Life of Brian.

Following your guided tour of Monastir, you'll head back to Tunisia, where your tour will come to an end at around 4 pm.

US$ 123.50
Free cancellation up to 24 hours before the service starts
Book

Everything excellent !! The guide Luis and the driver made me have a wonderful day. I recommend them to everyone. Opinion translated. Show original.

9.80 / 10 9 reviews
Immerse yourself in the historic and cultural legacy of the Roman Empire in Tunisia and explore ancient monuments on this guided tour Dougga and Bulla Regia.
US$ 118.60
Book
like

10 / 10 2 reviews
Discover the striking contrasts of the Tunisian capital and explore its most beautiful and important monuments on this guided city tour of Tunis.
US$ 46
Book
like

No rating yet
Discover Tunisia's ancient heritage and enchanting Mediterranean beauty on this guided tour of the Carthage archaeological site and the town of Sidi Bou Said.
US$ 54.40
Book