Discover the striking historical, economic and architectural contrasts of the Tunisian capital and explore its most beautiful and important monuments on this guided city tour of Tunis. 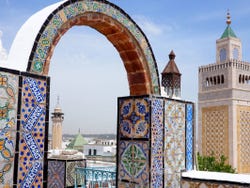 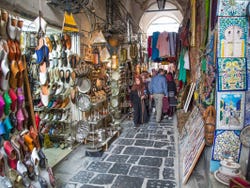 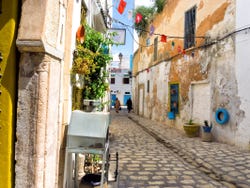 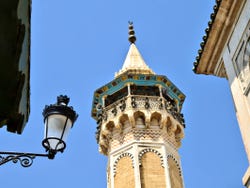 On the morning of your tour, you'll be picked up from your hotel in Tunis, ready to begin your guided tour around the fascinating Tunisian capital city.

The first part of your tour will introduce you to one of Tunisia's greatest prides: its modern education system. You'll visit Tunis University, before driving through El Manar, a neighbourhood just next to the university campus whose recent growth represents the country's incredible economic and demographic growth over the past few decades.

Your route will take you through the formerly prestigious French part of Tunis before reaching the Medina, the walled historic centre of the city, and a UNESCO World Heritage Site. Here, you'll hop off the bus to delve into the labyrinthine streets, where you'll feel as though you've travelled back in time. Following your expert guide, you'll explore the Tunis Medina, admiring the many different beautiful monuments, mosques and markets, dating as far back as the 7th century, when the city was first built. You'll be captivated by the vibrant atmosphere of daily life in the Medina as you mix with locals in the lively streets and souks.

Your guided city tour of Tunis will come to an end around 12 pm in the Medina, where you'll be able to continue exploring at your own pace.

We loved it! You walk through areas that a tourist would not do alone and they show you wonderful corners. Opinion translated. Show original.

9.80 / 10 9 reviews
Immerse yourself in the historic and cultural legacy of the Roman Empire in Tunisia and explore ancient monuments on this guided tour Dougga and Bulla Regia.
US$ 116.20
Book
like

8 / 10 3 reviews
Did you know that Tunisia is home to one of the largest Roman amphitheatres in the world? Discover it on this guided tour of historic Monastir and El Jem.
US$ 121
Book
like

No rating yet
Discover Tunisia's ancient heritage and enchanting Mediterranean beauty on this guided tour of the Carthage archaeological site and the town of Sidi Bou Said.
US$ 53.30
Book