Paddle through the beautiful canals with this Utrecht Kayak Tour. While paddling, you'll get to know one of the most beautiful city in the Netherlands from a different point of view. 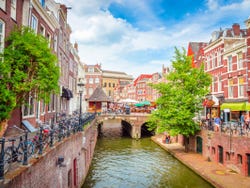 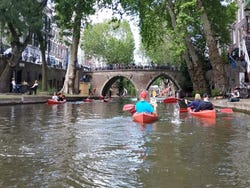 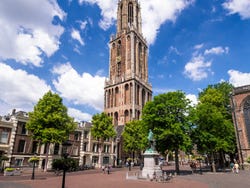 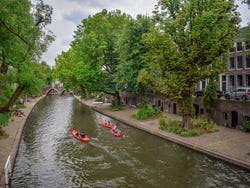 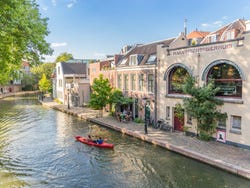 We'll meet at 2 pm at the statue of Count Jan Van Nassau in front of the Utrecht Cathedral. From there we'll take a short walk to the pier where the kayaks are waiting for us. Are you ready to paddle?

After some simple instructions, we'll start the kayak tour through the canals of Utrecht. First, we'll paddle through the green canal, named because of the vegetation that surrounds it. In between the strokes, we'll also learn about the history of the city, which for centuries held the economic and religious power of the Netherlands.

Halfway through the tour, we'll stop for 20 minutes at a bar on the banks of the canals, where you'll have a drink included. After this break, we'll return to the kayaks to continue paddling. This time we'll head for the Oudegracht, also called the old canal of Utrecht. This waterway runs through the historic centre of the city, so from the boats, we'll see the tallest bell towers.

While sailing we'll also learn some interesting facts about Utrecht: did you know that Alexander VI, the only Dutch pope, was born in Utrecht? We'll also discover what historical events took place in the city. The most important of these took place at the beginning of the 18th century with the signing of the Treaty of Utrecht, signed by the Netherlands, Spain and the United Kingdom.

Finally, at 5:30 pm we'll return to the departure pier.

US$ 42.50
No hidden fees or surcharges
Free cancellation up to 48 hours before the service starts
Book

No rating yet
Discover the great monumental heritage of one of the most historic cities in the Netherlands with this Utrecht Bike Tour, the popular form of transport.
US$ 32.70
Book