Travel to the province of Castellón and explore the beautiful medieval town of Morella and the town of Peñíscola, where you'll learn about the interesting history of Pope Luna. There's so much to be discovered! 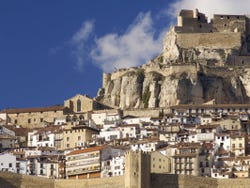 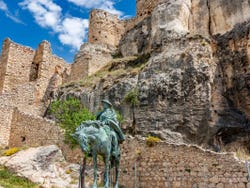 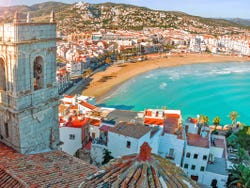 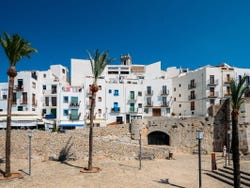 At around 7 am we will pick you up from your chosen meeting point in the centre of Valencia and we'll head north towards Morella. We'll travel almost parallel to the beautiful coastline for just over two hours, and we'll then reach the walled, hill-top town. This is a true medieval treasure!

We'll wander along the steep, characteristic cobblestone streets, and we'll stop at the different local craft stalls. We'll end at the historic castle, which stands tall at the top of the town. Did you know that El Cid Campeador once stayed here?

We'll enter this Islamic fortress built in the 13th century, and you'll discover how it gained importance for the Crown of Aragon. After the tour of the castle, you'll have some free time to keep exploring Morella and even try some of the delicious local cuisine.

After lunch, we'll head east to Peñíscola. On the journey, we'll reveal the origins of this historical city, famed for a very controversial historical figure, Pope Luna.

Once we reach our destination, we'll first visit the castle, located on a hilltop at the shore. Pope Luna, also known as Antipope Benedict XIII, is one of the most polemic religious figures in the history of Spain, and he used this fortress as his palace and personal library. We'll tell you more on the day of the tour!

We'll then continue our tour, visiting the old town of Peñíscola, which is home to Islamic, Roman and Templar architecture. Not only that, but we'll follow the outline of the old wall that protected the city. You'll feel like you've travelled back in time.

After a complete day exploring, we'll return to Valencia and drop you back at your selected meeting point.

When making your reservation, you'll be asked to select your preferred pick up point in Valencia:

Pick up and drop off at meeting point.

US$ 96.80
Free cancellation up to 48 hours before the service starts
Book

9.70 / 10 37 reviews
Be seduced by the romantic sunset of Valencia with this fantastic catamaran trip. Enjoy exclusive views of the stunning Mediterranean coast.
US$ 26.60
Book
like

Boat Party in Valencia with Lunch

No rating yet
Party, paella and a catamaran. Sail around Valencia while a DJ plays live music - the perfect way to discover the Mediterranean coast!
US$ 58
Book
like

9.60 / 10 36 reviews
Discover the best of Valencia, exploring the city's most emblematic monuments on this private tour with an exclusive guide just for you and your group.
US$ 90.70 per group
Book